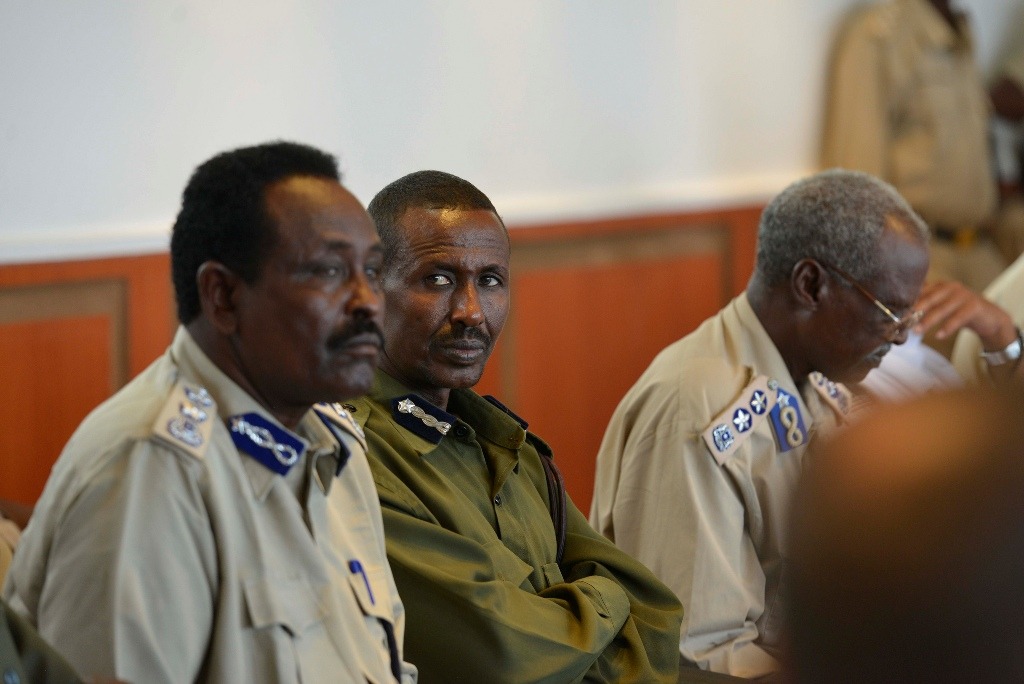 Mogadishu (HAN) August 19, 2014 – Intelligence and security note By. Abdi Guled (AP) and Nur Kafi (HAN). Somali security forces has launched a new disarmament campaign that has netted some 500 guns and sparked gun battles in a capital that is awash with weapons, said officials who want to get rid of the weapons before they fall into the hands of al-Qaeda-linked fighters.

ON TRAIL OF THE AL-SHABAAB TERRORIST GROUP IN KENYA


Somali National security (NSS) forces shot and killed Nour Barahow, a senior commander of Al-Shabaab’s intelligence unit leader in Mogadishu.
There are numerous intelligence reports of foreign jihadists in Somalia are leaving from Somalia to Iraq, Yemen and Syria to the new Islamic State in Iraq, and Al-shabaab remaining forign jihadist has again claimed to be allied with new Islamic state of Shaam (Lebnon, Syria, Iraq and Palestine).

Elements of Somali militants of Al-shabaab are moving from Somalia to neighbouring Kenya and Ethiopia, accrding to sources close to AMISOM military intelligence unit. Al-shabaab was banned as a terrorist group Worldwide is believed its stronghold and fighters is decreasing, it have between 2,000 and 3,000 young teen-age fighters in Somalia.

According to Geeska Afrika Online security reporter, Business, government schools, churches, police stations, refugee camps, bus stations, hotels, night clubs and a shopping mall have been mostly targeted by Al-Shabaab attacks in Kenya, to damage Kenyan economy and tourism industry, that is why Most of western countries including Russia, japan and China have issued travel advisories to their citizens visiting Kenya and Uganda.

Al-Shabaab leader Ahmed Godane also Known as Abu-Zubair, Godane comes from Hargeisa, the capital of Somaliland, several of his close allies have been assasinated or killed in Southern Somalia.

To empower Somali national Army and intelligence units, the Danish trade and development minister, Mogens Jensen, has send 19 million kroner in a special account to Somalia to aid the government and African Union troops in their struggle against Al-Shabaab terr tactics.

The Mogadishu Gun markets (Bakaaraha) have a long history in Mogadishu, a city once ruled by clan warlords. Disarmament campaigns, run both by weak Somali governments and by the U.S. military in the early 1990s, have had limited success. But the government is trying again.

Raids over the last week have netted some 500 guns and hundreds of boxes of ammunition, he said.

Two more night raids followed against a former U.S.-backed anti-Islamist warlord, Abdi Nurre Siad, who escaped during a firefight at his home. Troops also raided a home belonging to a Somali member of parliament who is the son of a former warlord. No weapons were found, Yusuf said.

“So far we have made good progress in the disarmament plan,” said Yusuf. “This plan is to ensure the stability of Mogadishu.”

One Somali intelligence official was killed during the operations, according to Yusuf.

But even as officials seek to remove weapons, others still come into the Horn of Africa country.

The Small Arms Survey, a research project based in Switzerland, says world governments in recent years have covertly delivered “tens of thousands of small arms and light weapons to various armed groups in Somalia despite a long-standing U.N. arms embargo.” The group said those weapons range from assault rifles to third-generation SA-18 MANPADS, a portable air defense system.

Somali civilians own more than 500,000 guns, the group estimates.

During the early 1990s, U.S. Marines fighting warlord Mohammed Farah Aidid tried to carry out a disarmament campaign. It had only limited success. One challenge the government faces is locating buried weapons. Mogadishu gun runners have long buried their caches to avoid detection.

Some Somalis believe the campaign is a political witch hunt aimed at weeding out rivals of the country’s leadership as the country gears up for a proposed 2016 national election. Whether that planned election happens will depend on the state of security in Somalia, specially, Puntland-Khatumo issue or Somaliland policies of secession.

Dahir Amiin Jesow, a Somali legislator who heads a security committee in the parliament, said the disarmament campaign should be done according to the law. A proposed disarmament law has been approved by the government’s cabinet but hasn’t yet been voted on by parliament.

“Somalia disarmament is a good solution for stability in Mogadishu. However, negotiations and even buying the weapons from its Warlord owners would help to avoid certain grievances in Mogadishu Somalia,” according to Mahad Awad, deputy House speaker.