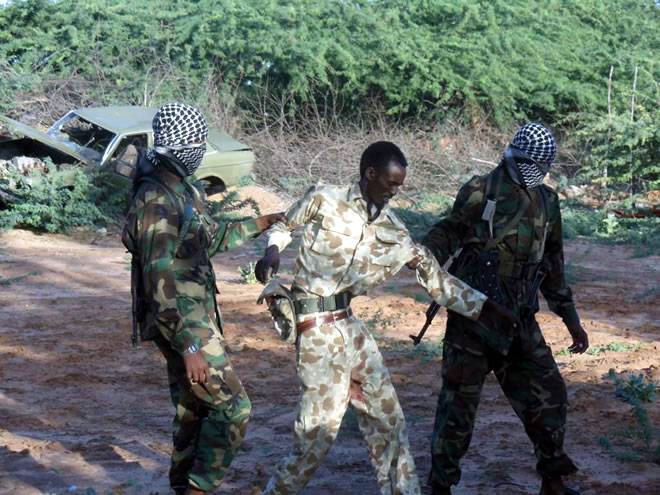 According to confirmations received from the SNA intelligence officer, “Somali militant Al-Shabaab has killed by firing squad four men accused of spying for the CIA and other intelligence agencies.”

The men excuted, who included two Somalia National Army soldiers, were shot in front of a large crowd in the southern town of Baardheere, witnesses said.

According to Al-Shabaab judge, another one of those executed had been aiding U.S. operations in Barawe, a port town and former Al-Shabaab stronghold that was captured last year by Somali and African Union forces, while the other two worked for Ethiopian intelligence and Somalia’s security agency in Southern Somalia.

“After hearing the charges against the four and their confession, the Islamic court sentenced them to the death penalty,” the judge said.

“One of the spies worked with the regional CIA office to facilitate the killing of an Al-Shabaab commander,” Militant  judge in the Al-Shabaab-run court told reporters through Radio.

Baardheere citicen Ali Ronow told the AFP news agency that hundreds of people watched the killing of the four suspected spies on Tuesday.

“The men were blindfolded and shot from the back by a team of hooded gunmen,” he is quoted as saying.

Update in Mogadishu: a bomb exploded in a car in Mogadishu ad wounded one. Car explosion ripping off the leg of the driver as he travelled near the central K4 roundabout, police officer Awil Mohamed said.

“I saw his leg in a shoe left inside the car” said Farah Abdi, who was nearby the busy junction when the bomb exploded.