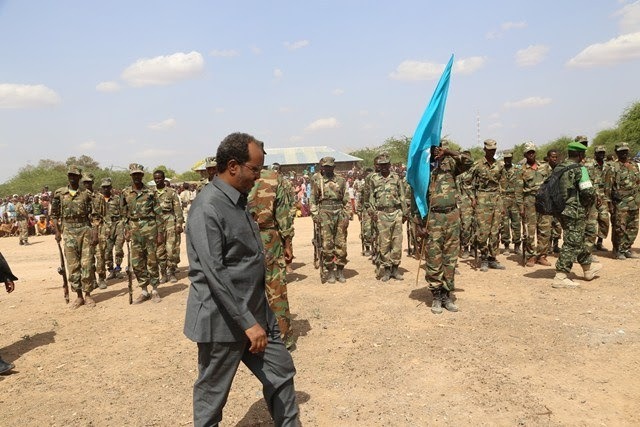 Government troops and African Union peacekeepers repelled the attack and no government official was hurt, Mustafa Dhuhulow said. Three of the four extremist attackers were shot dead by soldiers after they forced their way into the presidential palace late Tuesday, sparking an exchange of gunfire, he said. The fourth militant was wounded.  The Information minister Dhuhulow told Geeska Afrika Online security reporter in Mogadishu that the  police commander Abdihakim Saaid and intelligence chief Bashir Gobe were replaced immediately.

A new minuster of Somali’s  federal National security were  appointed in changes announced by Prime Minister Abdiweli Sheikh Ahmed, who was inside the palace when the attack happened. Dhuhulow said the government would implement sweeping new security measures to prevent such terror attacks.
In another terror from Somali militants of Al-Shabaab attacked a military base in the industrial road (Jidka Warshadaha) known as the Industrial Street. This came to an end when the Somali soldiers at the base resisted and fought back.

The Somali militants of Al-Shabaab have used the same hit and run tactics they used the first attack of this year in February on the Presidential Palace. There is still no officially confirmed casualty list or numbers on both sides at each incident.

Gunfire and explosions can be heard inside presidential palace . The Al-Shabaab attack bore all the hallmarks of Somalia’s al-Qaida-linked Shebab rebels, who have launched a string of strikes against the country’s internationally-backed but fragile government.

According to Ridawan haji Abdiwali, the prime minister, ministers and speaker of parliament are all save.

“There was an attack on the presidential palace, with gunmen attacking a checkpoint at the rear of the compound,” police officer Ali Hussein told AFP.

“There was a major explosion and security forces are fighting them,” he added, without confirming if the insurgents had managed to enter the city center compound, known as the Villa Somalia.

Witnesses said there was heavy gunfire and several heavy blasts believed to be grenades.

“Bullets are flying around coming from the palace,” said Halimo Nure, who lives close to the compound, one of the most heavily defended areas of the city. “There is shooting and gunfire, there are also explosions like they are using grenades.”

Al-Shabab spokesman said “We have entered the so-called presidential palace. We have now captured some parts of the palace and fighting is still going on,” Al-Shabab Spokesman Sheikh Abdiasis Abu-Musab told reporters in Mogadishu.

Eye witness told Geeska Afrika Online, that the commando style raid started with a car bomb at a barrier near the entrance to the compound, after which the militants attacked from two directions.