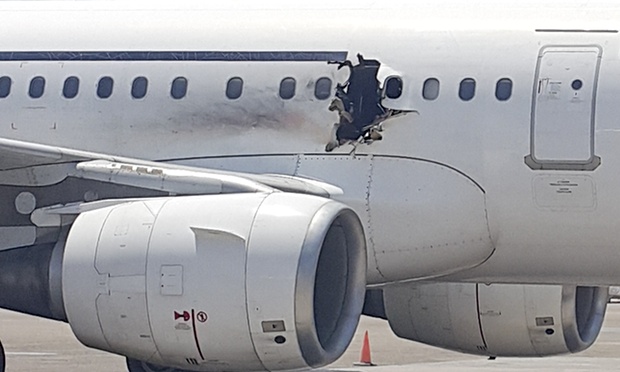 MOGADISHU (HAN) February 7, 2016 – Public Diplomacy and Regional Stability Initiatives News. Somali authorities have detained at least five people for questioning about a midflight explosion aboard a passenger plane this week that killed one person and wounded two others, Somali intelligence sources said Saturday.

At a news conference in Mogadishu, Somali Aviation Minister Ali Ahmed Jangali confirmed the arrests and said the explosion that ripped a hole in the side of the Daallo Airlines Airbus was caused by a bomb, not mechanical failure.

A senior Somali security official told VOA that the FBI is helping Somalia with the investigation.

The blast forced the pilot of Flight 159, bound for Djibouti with 74 passengers on board, to make an emergency landing about 15 minutes after takeoff from Mogadishu.

“At least five people are being held. Two of them are suspected of assisting the suspected bomber,” an official of the Somali Intelligence Agency told VOA.

Mogadishu airport staff and Daallo employees were among those detained, and more arrests might be forthcoming, according to the official, who declined to be identified.

The man who was killed was pulled out of the plane as the cabin depressurized, through the hole in the fuselage left by the bomb explosion. He was identified as Abdullahi Abdisalam Boorle.

The aviation minister would not say whether Boorle was linked to the attack, citing the ongoing nature of the investigation.

Somalia’s former director of national intelligence, Ahmed Moallim Fiqi, told VOA earlier that the nature of the attack and evidence pointed to “a planned bomb attack” against the airliner.