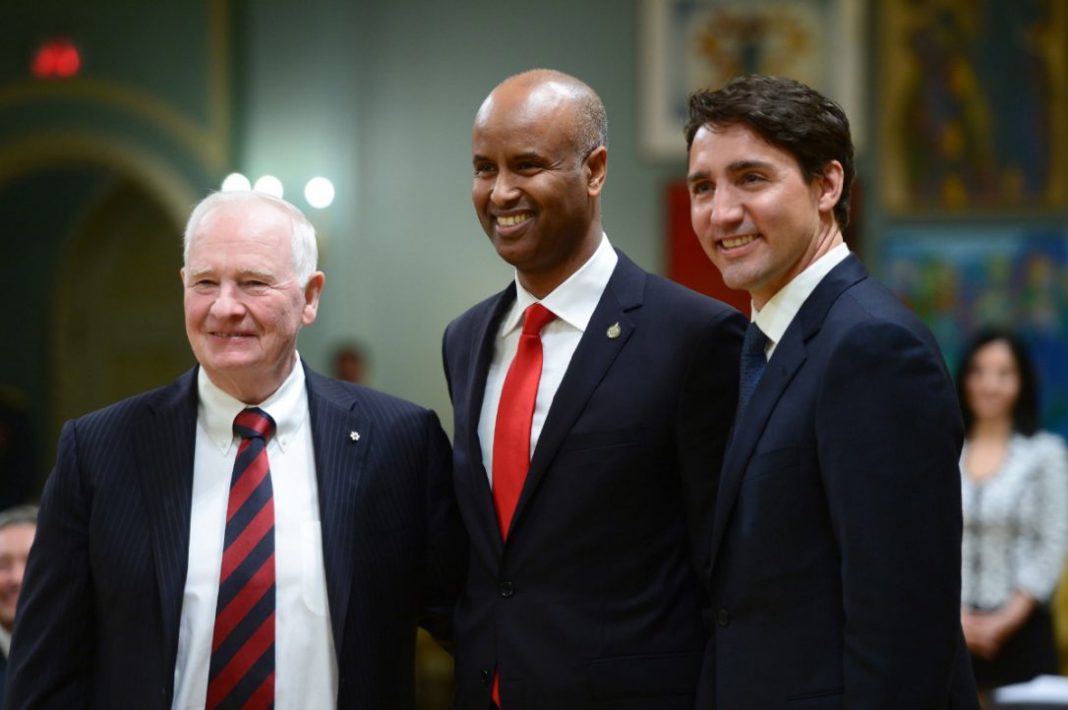 OTTAWA (HAN) January 11.2017 Public Diplomacy & Regional Security News. ALEX BALLINGALL. In 2004, Ahmed Hussen was proclaimed a “Person to Watch” in the country’s biggest city for his community work in Regent Park. He told the Star at the time: “I don’t think I could handle the life of a politician . . . I don’t want to be front and centre.”

Flash forward to Tuesday, and there was Hussen, front and slightly to the right, swearing an oath to serve the Queen in front of a cluster of clicking cameras as he officially joined the reshuffled Liberal cabinet of Prime Minister Justin Trudeau. The rookie MP for York-South Weston has leapt from the backbench of the party to become Minister of Immigration, Refugees and Citizenship, a position made all the more noteworthy for Hussen’s own story. He came to this country as a refugee from war-torn Somalia, settling on his own in a foreign land as a 16-year-old in 1993.

Just hours after formally assuming his new post, Hussen — who has been a lawyer, human rights advocate and community activist — said the trajectory of his life would affect how he approaches the job, just like it would for anyone else.

“I am extremely proud of our country’s history as a place of asylum, a place that opens its doors and hearts to new immigrants and refugees, and I’m especially proud today to be the minister in charge of that file,” Hussen told reporters outside the House of Commons on Tuesday.

“The story of Canada is the story of immigration, and I’m especially proud and humbled that the prime minister would task me with this important role.”

Hussen was first elected in 2015, part of the surge of votes that saw the Liberals nearly sweep Toronto and much of the surrounding area. Since coming to Ottawa as Canada’s first Somali-born MP, he has served on the Justice and Human Rights Committee as well as the Canada-Africa Parliamentary Association.

Prior to being elected, Hussen worked as a lawyer, practicing criminal defence, immigration and refugee law. He also served on the board of the Global Enrichment Foundation, which helps women in East Africa go to university and colleges in the region, as well as the board for the Toronto-based Journalists for Human Rights.

Speaking to the Star for after his election in 2015, Hussen described how he arrived in Canada as a solitary teenager and went to high school in Hamilton. After graduation, he moved in with one of his brothers, who lived in subsidized housing in Toronto’s Regent Park neighbourhood. To put himself through school at York University, Hussen commuted nearly two hours to pump gas in Mississauga.

It was his experience living in Regent Park that drew him into politics. Hussen co-founded the neighbourhood association that pushed for the inclusion of more public housing in the $500-million redevelopment of the community, and eventually became a prominent voice as president of the Canadian Somali Congress.

In 1999, the newly elected George Smitherman — who went on to be a provincial cabinet minister and Toronto mayoral candidate — met Hussen in Regent Park. Smitherman became a kind of mentor for Hussen, eventually helping him land a gig working in former premier Dalton McGuinty’s office.

Smitherman told the Star Tuesday that he was thrilled to see Hussen vaulted to cabinet after such a short period on Parliament Hill.

“That’s the beauty of politics. If your leader sees your talent, you have the opportunity to ride the express elevator to the top,” he said.

“He’s got an impressive energy and an irrepressible sprit and I think those things are going to serve him extremely well and serve Canada well.”

Hussen takes over the immigration department that was previously headed by veteran Markham MP John McCallum, who shepherded nearly 40,000 refugees from Syria into Canada during his 14 months on the job.

McCallum is leaving his post to be Canada’s ambassador to China and told reporters Tuesday that he feels the department is in “good hands” with Hussen.

With files from Marco Chown Oved