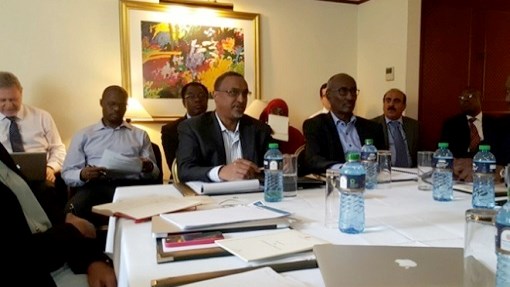 MOGADISHU (HAN) April 7. 2016. Public Diplomacy & Regional Security News.Somalia has agreed to a one-year monitoring program with the International Monetary Fund, as the nation tries to rebuild a functioning state amid an Islamist insurgency.

The staff-monitored program, which doesn’t involve loans, aims to help Somalia improve budget planning, boost oversight of banking and money-transfer businesses, clear its arrears and conduct currency reforms, the IMF said in a statement on Wednesday. It paves the way for “normalizing” the fund’s relationship with Somalia after more than two decades of war, it said.

“Technical assistance and capacity building will be an integral part of the program,” which is due to start in May, Zandamela said.

Somalia has been wracked by instability and civil war since dictator Mohamed Siad Barre was ousted in 1991. President Hassan Sheikh Mohamoud, backed by an African Union force, has been trying to re-establish order amid frequent bombings and suicide attacks by al-Shabaab militants seeking to rule by Islamic law. U.S. drone strikes have helped weaken al-Shabaab after military gains that drove the group out of Mogadishu and other southern and central regions over more than four years.

The economy is largely dependent on remittances sent home by Somali workers abroad. Growth was probably 3.7 percent in 2015 and the rate of inflation was 1 percent, the IMF said.

In 2013, the fund officially recognized Somalia’s government after 22 years, but said the country was ineligible to borrow from the fund because it had arrears of $352 million. The IMF reviewed the Horn of Africa nation’s economy for the first time in July.

Even as the country has made progress since 2012 to improve economic and social infrastructure, “considerable development efforts are essential for the reconstruction of Somalia,” said Zandamela.