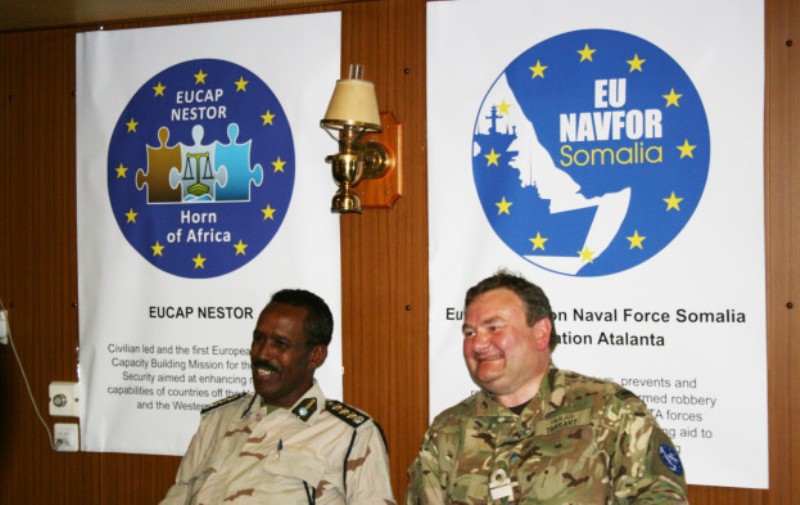 London (HAN) July 13, 2014 – Features & Analysis, in Somalia Warlords, religious groups and clans have been fighting for control of Somalia.

According to BBC Analysis, the Operation Commander of the European Union Naval Force (EU Navfor) in the region, a number of local factors had led to Somali pirates being “contained and restrained”, and that a combined naval forces raid on one of their land bases back in May had had a profound effect in discouraging pirates from putting to sea.

But the European Union Naval Force (EU Navfor) are under no illusion that the problem is already solved and knows it could still return. The World Bank estimates that pirates netted more than $400m
News Update: On July 10, 2014, the EU Naval Force welcomed a new ship to its counter-piracy Task Force – the German Navy replenishment ship FGS Berlin.

After a two-week transit from Northern Germany the ship, under command of Commander Marcel Rosenbohm, arrived in the operating area off the coast of Somalia. FGS Berlin has taken over the duties from auxiliary replenishment tanker FGS Rhön which has been deployed with the EU Naval Force for the last three months.

Together with the German flagship FGS Brandenburg, Dutch frigate HNLMS De Zeven Provinciën and Spanish frigate ESPS Relámpago the support ship will contribute to the European Union’s fight against piracy in the Indian Ocean and Gulf of Aden.
The new Oxford University maritime study with King’s College London and published in the British Journal of Criminology, says Somalia witnessed a surge in pirate attacks when territory was contested or elections took place.

This suggested the behaviour of clan leaders in Somalia was similar to that of politicians in Italy and Taiwan, who extended protection to criminals when they needed extra funds to further political ambitions, the study adds.

“Local communities support pirates when there isn’t a better alternative income stream,” said Federico Varese, a co-author of the report based at the University Oxford.

“By improving the infrastructure of Somalia, building new harbours and roads to link the remote areas to trade routes, our research concludes that poorer communities would be less likely to resort to piracy,” he added.

People in Somalia’s Puntland city of Bosasso cut ties with pirates once the economy grew, the Oxford University study says.

“As the city regained its importance as a major trading port for livestock and an import centre for the wider region, pirates were no longer tolerated – pirate hostages were freed and pirates were imprisoned by the local clan leaders,” the study adds and