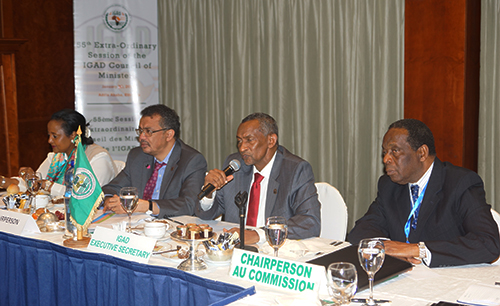 MOGADISHU (HAN) February 12, 2016 – Public Diplomacy and Regional Stability Initiatives News. On top of the agenda were the security situation in Somalia, and the implementation process of the peace agreement in South Sudan as well as approval of the IGAD budget 2016 and the IGAD Strategy Plan 2016-2020.

Due to the fact that IGAD officials at the 55th Council of Ministers were to partake the African Union Heads of state and government opening in Addis Ababa the same morning, Hon. Dr Adhanom without any delay invited his counterpart to adopt the programme for the day.

The Minister of Foreign Affairs of Somalia made a very informative presentation of the security situation in Somalia and thanked IGAD member states and other countries contributing to the African Union peace mission to Somalia (AMISOM) for their unwavering support. He highlighted the continuous political support provided by IGAD to the ongoing process and past ones. He invited his counterparts to hold the next IGAD Council ministers to be held in Mogadishu.

Following the overview of the situation in Somalia, the Minister of Foreign Affairs of Djibouti called for a meeting of the AMISOM Troups Contributing Countries (TCC) to be held in Djibouti towards the end of February 2016.

The Minister of Foreign Affairs of Kenya urged her counterparts to also take the opportunity during the next AMISOM TCC meeting to discuss further and better military cooperation as well as looking the financial gaps. Hon. Amina recommended IGAD Ministers of Foreign Affairs to include discussions on a regional security cooperation framework in the agenda of the AMISOM TCC meeting to come.