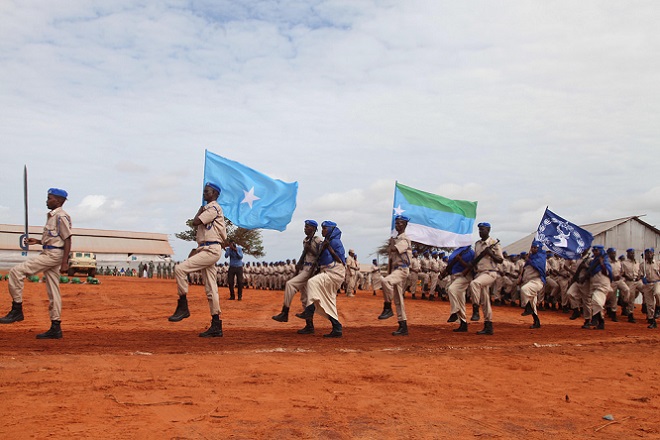 KISMAYO (HAN) May 24.2016. Public Diplomacy & Regional Security News. A total of 198 Somali police graduated in Kismaayo on Monday, after a three-month intensive course, organized by the police component of the African Union Mission in Somalia (AMISOM). The new police officers will be deployed in Kismaayo to maintain law and order.

They are the first batch of 600 officers from Jubbaland, who will be trained with funding from UK’s Department For International Development (DFID).

The police officers received training on basic principles of policing, arrest of suspects and public order management. They were also taught aspects of human rights law.

Speaking at the event, Somali Police Commissioner, Brigadier General Mohamed Sheik Hassan Hamud urged the officers to be diligent in their work.

“You are needed to keep the culture and discipline and to serve the people. Don’t misuse your positions and power in the community; always keep your mind focused on that. You are Somali Police, Jubbaland Police and you are serving your community and others. Endeavor to assist the vulnerable and don’t misuse your weapons,” the Somali Police Commissioner advised the new officers.

The Deputy Special Representative of the African Union Commission Chairperson (DSRCC) for Somalia Hon. Lydia Wanyoto emphasized the important role played by local security institutions. She asked the new officer to uphold discipline and impact positively on the lives of the communities they serve.

She made a case for recruitment of more female officers into the police force. There were only 12 women police officers out of the 198 officers who graduated.

“We would like to see more mobilization of women to join the Somali Police Force. I applaud the twelve that are already with us, to serve the community. I congratulate them in addition to their male counterparts,” said Hon. Wanyoto.

AMISOM Police Commissioner Anand Pillay expressed the commitment of the Force to mentorship and training of Somali police officers.

“This is the first group of police officers for the Jubbaland state and as we all know, policing is an integral part of any country, responsible for ensuring community safety, protection of the community and ensuring long term stability in the country. So this is a great responsibility on each one of you to ensure that you protect your communities, ensure their safety and also ensure stability in Somalia‘’.

The Interim Jubba Administration President Ahmed Mohamed Islam noted that the officers had been entrusted with the security of the communities that they will serve. He urged them to uphold a high sense of discipline and professionalism.

“These police officers were not trained to guard ministers and Members of Parliament. They were trained to safe guard the interests of the nationals. They have to protect communities from criminals and help the vulnerable members of society,” he emphasized.

Training and mentorship of Somali Police is central to the mandate of AMISOM Police. Through individual and institutional capacity building, AMISOM Police aims to transform the Somali Police Force into a more professional policing outfit.