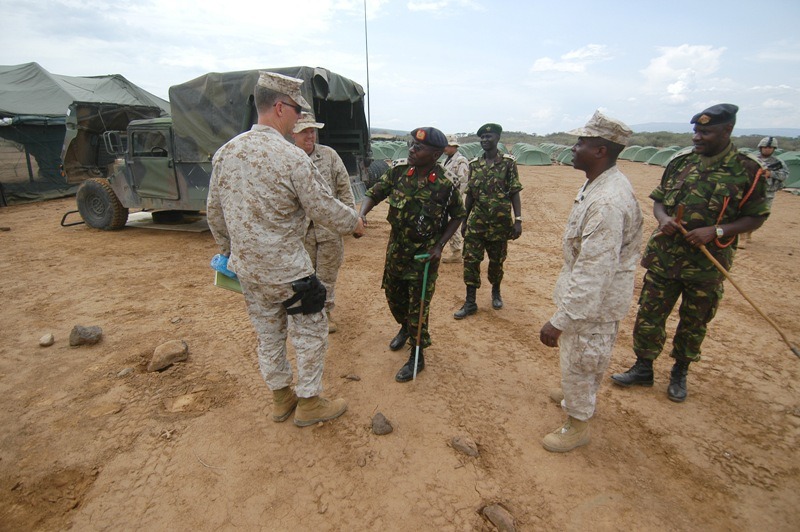 Nairobi (HAN) May 15, 2014. Regular Expert Analysis , Your Power & Regional Influence Magazine. Original Article published Sabahi (Africom). Somali: Should Kenya Withdraw From Somalia? What do you think — should Kenyan troops withdraw from Somalia? How or When?  Share your opinions in the comments below, after you read the full report..

By Rajab Ramah and  Hamdi Salad, original Article published Sabahi (Africom). Somali: Faced with an increase in undeterred, high-profile terror attacks in Kenya, politicians, analysts and citizens alike have weighed in on the vigorous debate about whether the Kenya Defence Forces (KDF) should withdraw from Somalia.

Recent calls by some Kenyan politicians for the government to present a roadmap for withdrawal have struck a chord among the segment of Kenyan’s population weary of the human cost of fighting al-Shabaab. But security analysts from Kenya and Somalia warn that withdrawing Kenyan troops from the African Union Mission in Somalia (AMISOM) is short-sighted and ill-advised.

“In our attempt to help a neighbour we have suffered a lot — costs ranging from human loss and monetary loss,” said Kenya’s Senate Minority Leader Moses Wetangula. “Now it is time we plan as a country to end our presence in Somalia and save the country from further conflicts.”

“We in the Coalition for Reforms and Democracy [opposition party] have already written to the government requesting that they furnish us and the country at large with a roadmap for withdrawal of Kenyan forces inside Somalia,” he told Sabahi.

Wetangula said any exit strategy should include training Somali military and police and rallying development partners to help Somalia achieve a better future.

Ronald Tonui, a Jubilee party member who represents Bomet Central constituency in the National Assembly, said he plans to present a motion in parliament after June 3rd, when lawmakers return from recess, to withdraw Kenyan troops from Somalia.

“It does not make any sense that our forces are trying to keep peace in Somalia at the expense of Kenyans’ safety,” Tonui told Sabahi. “We have remained exposed to terror attacks since we took over the assignment in Somalia in 2011. It is time we ended it for the sake of peace of our country.”

“The series of attacks we have faced since the KDF [operation] in Somalia has had lots of negative effects on our economy, thus deterring our development progress as a nation,” he said.

“To me, this entire struggle is not worth it,” he said. “We [would] rather be termed cowards but [ensure] our citizens are safe than be seen as brave while the entire nation is intimidated by the unstoppable attacks.”

Mary Okoth, 40, a florist in Nairobi’s Westlands neighbourhood, said there was no logic for Kenya’s continued involvement in Somalia given the increasingly unstable security situation at home.

“An old saying says that charity begins at home,” she told Sabahi. “You cannot run out with a bucket of water to douse a neighbour’s house when your own house is on fire. I think the forces should come home and clear the mess here before they can think of any international engagements.”

‘The government will not allow terrorists to blackmail us’

Despite the calls to withdraw and growing support for bringing the troops home, the Kenyan government has said unequivocally that is not an option.

“The government will not allow terrorists to dictate or blackmail us into changing our local or foreign policy,” Deputy President William Ruto told reporters May 5th, days after a string of deadly terrorist attacks in Nairobi and Mombasa that killed six people and injured scores.

“We will not withdraw until Somalia has a stable and secure government free from terror,” he said, adding that recalling Kenyan troops from AMISOM would create a safe haven for al-Shabaab, which would pose an even greater security threat to Kenya and the entire region.

“Our collective security is a shared responsibility; every person must play his or her part in maintaining unwavering vigilance,” Ruto said. “All arms of government must play their full part and every citizen must also fulfil their patriotic obligations.”

“The proposals to have the forces withdrawn are misplaced,” he told Sabahi. If fact, he said his parliamentary committee would be “willing to support any push to have the soldiers increased.”

Without giving exact figures, Shill said Kenya’s financial burden for keeping KDF soldiers in Somalia was less than publicly perceived because a huge percentage is covered by AMISOM and supported by the international community.

“It should also be noted that the main reason that drove us into Somalia was to avoid further attacks as the ragtag militant group had consistently launched attacks and kidnappings within Kenyan territory,” he said.

Shill said Kenya should stay in Somalia to finish what they started, to eliminate al-Shabaab once and for all.

KDF pull-out would be ‘disastrous’

Simiyu Werunga, a retired Kenyan army captain and director of the Africa Centre for Security and Strategic Studies in Nairobi, said withdrawing would not only be disastrous for Somalia but also for the entire region.

“Pulling out would mean we would be giving the terrorists time to declare victory, regroup and establish a launching pad for further attacks,” he told Sabahi. “To me, this is the time operations should be intensified because [al-Shabaab] has been weakened and run out of their bases.”

Werunga said the continuing attacks in Kenya were a result of failed internal security.

“Our soldiers should [stay] in Somalia until they eliminate the terror threat, but they should not be involved in the internal political affairs of Somalia,” Werunga said, adding that the Kenyan government should tackle corruption at home and boost intelligence gathering to prevent terror attacks.

For his part, former Somali presidential spokesman and senior adviser Abdirahman Omar Osman Yarisow said that the debate on withdrawing Kenyan troops from Somalia was uncalled for and ill-advised.

“The priority is to deal with al-Shabaab. Any pull-out of any forces under the AMISOM arrangement would mean a weakened approach to dealing with al-Shabaab,” he told Sabahi.

“A pull-out by the KDF would mean trouble in the port city of Kismayo where al-Shabaab remnants may re-group and re-capture the port that acted as their operational hub,” Yarisow said.

“We, the Somali people and the government I served in the recent past, appreciate the work Kenyan forces have done for Somalia,” he said. “It is unfortunate that criminals have opted to attack Kenya in what they perceive as retaliation.”

Eunice Oloo, an advocate and legal officer for the Nairobi-based Rights Promotions and Protection Centre, said she supported the move to retain Kenyan troops in Somalia because it has helped stabilise the nation and reduce the humanitarian crisis there.

“The burden that the humanitarian crisis has been putting on Kenya and other development partners for hosting refugees who have been running away from war in Somalia has been heavy,” she told Sabahi.

“[Therefore] the forces’ continued stay translates to a stable Somalia. On the flipside, withdrawal will translate into a [… ] mass displacement of citizens, a majority of whom will end up in Kenya as refugees,” she said.

What a withdrawal means to internal security

The KDF contributes over 3,600 troops to AMISOM, so if Kenya were to withdraw, it would be a blow to the mission’s strength and military operations, according to Abdikarim Daud Nur, a former member of the Somali military who teaches political science at Mogadishu University.

However, he said withdrawing would be impractical and have no impact on Kenya’s internal security, as al-Shabaab militants were targeting Kenya before it sent troops to Somalia.

“It took Kenya a long time to become part of AMISOM so that it can safeguard its strategic needs,” he told Sabahi. “Therefore, I do not think it is going to let go of that opportunity easily due to a few explosions and threats from al-Shabaab.”

What does have an impact on internal security are Kenya’s indiscriminate arrests of ethnic-Somalis and Muslims in general, Nur said. “That will create religious hatred and will push many young people into joining al-Shabaab and al-Qaeda.”

Colonel Abdullahi Adam Irro, a former member of the Somali military and police during the Mohamed Siad Barre regime, agreed that pulling out of Somalia would not improve Kenya’s domestic security.

“On the contrary, what can happen is that [al-Shabaab] says ‘Kenya has weakened’ and continue their attacks targeting Kenya,” he told Sabahi.

Irro also echoed concerns about what a withdrawal would mean for AMISOM’s overall military offensive and the ability of the Somali government to build on the success the military operations have had so far.

If Kenyan troops are recalled, a plan should be in place to replace them immediately, he said. “Time will have to be provided for those positions to be filled before Kenya ever withdrew because if they left it would mean al-Shabaab would reclaim territories they have been cleared from.”

For example, he said, when Ethiopian troops unexpectedly withdrew from Hudur in 2012, al-Shabaab returned and killed many civilians who had supported the federal government and allied forces.

Nonetheless, Irro said for Kenya to continue participating in the AMISOM operation with support from all Somalis, it should take steps to train its soldiers on human rights issues and Somali culture, and ensure its intentions are clear to the Somali people.

Ultimately, it is in the best interest of both Somalia and Kenya for the two countries to trust each other, work together, share intelligence and fight the enemy together, he said.