“Families we have interviewed and many of those who filled the repatriation forms have shown that they are returning because of threatening rhetoric by Kenyan regional security officials who recently visited the camp,” Gurhan told VOA’s Somali Service.

He says Kenyan regional security officials told the refugees they must leave before they are forcibly driven out “when the camp shuts down this month.”

“We spoke to families in the camp who are returning for fear, not willingly or voluntary,” Gurhan said. A recent agreement between the U.N. and the Kenyan and Somali governments stated the refugees would not be forced across the border, back into Somalia.

“The return of refugees to Somalia would contravene international obligations,” Gurhan said.

“We are committed to ensure that all returns to Somalia are voluntary and carried out in dignity, safety and protection. UNHCR would never be part of a repatriation process that forces refugees,” he added.

Gurhan said refugees forcibly returned to Somalia are vulnerable to theft and exploitation.

“We fear that these people fall into the traps of armed groups when they return unprepared,” he said. UNHCR has received reports that armed gunmen have robbed former refugees of their supplies.

Kenya not closing camp yet 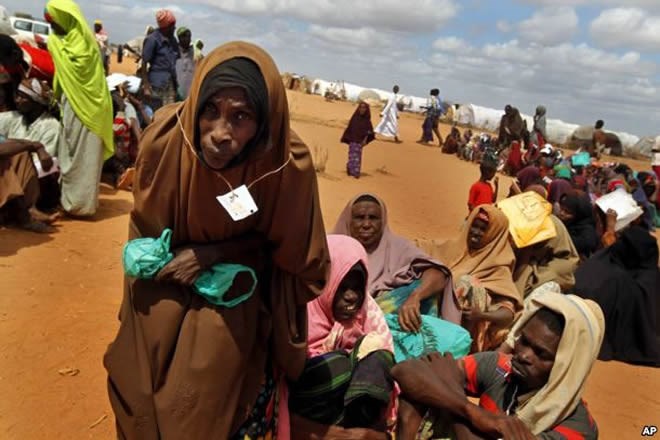 Earlier this week, Interior Minister Joseph Nkaissery said the Kenyan government would not implement its decision to close the Dadaab camp until peace in Somalia is restored.

“[W]e are in the right direction and we are waiting Somalia to be pacified so that the refugees will be able to go back,” Nkaissery told Kenyan media.

Nkaissery’s statement apparently softened Kenya’s previous decision to close the Dadaab refugee camp by the end of this year.

“Kenya’s new position, though it is only said verbally by the interior minister, deserves welcoming because it gives us hope and space to decide our own [fate],” he said.

Last month, the UNHCR appealed to donors for an additional $115 million to fund the voluntary return and reintegration of Somali refugees from Dadaab.

Previously the agency appealed for $369 million for the “Somalia situation”.

During his recent visit to Kenya, U. S. Secretary of State John Kerry has announced that the U.S. is allocating an additional $117 million “to support refugees, returnees and drought victims in Somalia.

Kerry said another $29 million will be donated to the U.N. refugee agency for the safe and voluntary return of Somali refugees in Kenya, primarily from Dadaab.