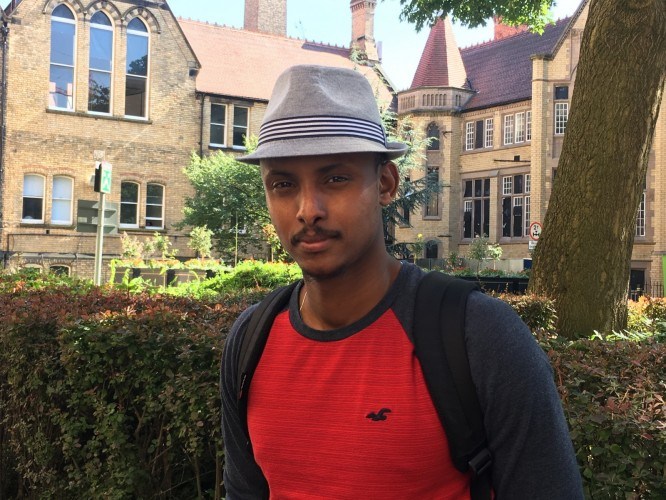 IF YOU’VE ever bemoaned the cost of university tuition, or lodging away from home, spare a thought for inspirational young Somalian Abbas Roble. After travelling through Africa to the Libyan coast, where he caught a people smugglers’ boat to Crete and on through Europe, his international classification meant astronomical student fees and no access to student finance.

Initially detained by UK immigration for a year on his arrival in England in 2007, Roble was nevertheless determined to educate himself. Once released, he joined a college in Leeds to take his GCSEs and an Access to Higher Education course, but his financial situation meant he was then unable to accept an offer to study Physics at Manchester University.

Eventually, after a two-year wait, a full tuition fee bursary and a small grant was made available courtesy of Helena Kennedy Foundation’s Article; which takes its name from Article 26 of the universal declaration of human rights. This states that education is an inalienable human right and should be accessible to all.

Hence Roble joined the class of 2012. Still unable to pay rent, he commuted from his host family home in Leeds to Manchester every day for three years until – following an appeal from The University’s Director of Student Experience – an academic who lives close to campus generously offered to provide free term-time accommodation for his final year.

Despite receiving exceptional grades throughout his degree, however, it would still have been near impossible to find the funding for a PhD programme. Fortunately, Manchester alumnus and longstanding donor David Buckley heard Roble’s story and was inspired to make a generous donation to the University to help. With the guarantee of funding in place, the enthusiastic pupil obtained a First Class Masters of Physics with Theoretical Physics, and is about to start his PhD at the Photon Science Institute.

Abbas Roble, now 22, said: “Manchester is where new physics is born. It’s where the atom was split, the first computer was built and graphene was isolated. The University is a world-leading institution for fundamental physics, and Manchester is a beautiful cosmopolitan city, so I would highly recommend it to anyone who wants to have the perfect student experience.”

Dr Tim Westlake, The University of Manchester’s Director of Student Experience, said: “Abbas is an exceptional young man, and I’m delighted that the University, with the help of donors, has been able to support him in his studies. We are profoundly grateful for David’s gift, which has helped Abbas finally reach his goal, and the partnership with the Helena Kennedy foundation is greatly valued. We look forward to welcoming more students like Abbas in the future.”