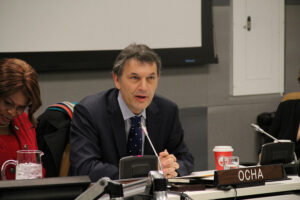 Lazzarini said rapidly rising malnutrition and food shortages across the country resemble the warning signs which preceded the 2011 famine in which about 260,000 people died.

“Only years after this famine where basically we said ‘never again’, a crisis is unfolding in front of us,” he told Reuters.

“It would just be morally difficult to justify and to accept that a new crisis of this scope could unfold,” he said.

Donors have pledged billions of dollars to rebuild Somalia after more than two decades of strife, but little progress has been made, hindered by continued fighting despite the presence of a 22,000-strong African Union peacekeeping force.

With high-profile conflicts raging across the globe such as the wars in South Sudan, Syria and Ukraine, aid budgets have been stretched. The U.N. has raised only about a third of the $933 million required for Somalia in 2014.

International donors promised 1.8 billion euros ($2.5 billion) in reconstruction aid for Somalia at a Brussels conference last September but Lazzarini wants those donors to go the “extra mile” and also help with the new humanitarian crisis.

“If we want to cement a peace agenda and if we want to avoid a new catastrophe just (three) years after the last one, which is totally preventable, we need to act now,” he said.

The U.N. has sought to improve its early warning mechanisms after it was blamed for the scale of the famine in Somalia in 2011 because it failed to spot the warning signs.

The U.N. last month warned of “alarming rates of malnutrition” in the Somali capital Mogadishu where aid agencies cannot meet the needs of 350,000 people due to insufficient funds, drought and conflict.

Security in Mogadishu deteriorated this year after a series of bomb and gun attacks by Islamist Al Shabaab militants who were pushed out of the capital in 2011 but remain in control of swatches of the countryside.

In rural areas, Lazzarini said lack of access has hindered the work of aid agencies unable to send supplies to key towns.

An offensive by the Somali army and Amisom, the AU peacekeeping force, dwindled al Shabaab’s territory earlier this year but many of the newly seized areas were cut off from major centres and food prices doubled because militants disrupted supply roads, Lazzarini said.

President Hassan Sheikh Mohamud told Reuters on Tuesday that in coming days Amisom is likely to restart the offensive which was halted in May due to the onset of the rainy season.

Lazzarini said he has appealed to Amisom and Somali government officials to make sure the new offensive addresses the supply road problems as the humanitarian situation is critical.

“Otherwise we will continue to have population being cut off from basic assistance,” he said. HAN & UNSC