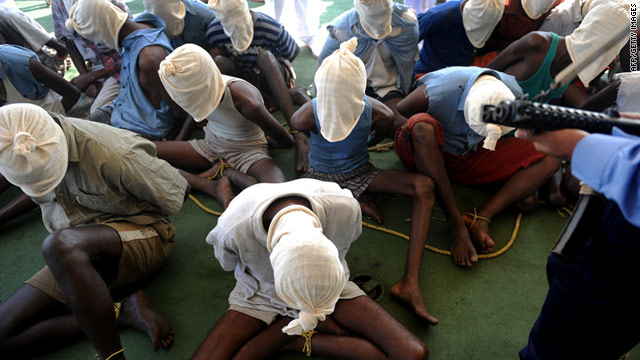 Somali protesters have expressed outrage over reports emerging in India that 50 out of 119 detained Somalis suspected of being pirates could face the death penalty at the end of an ongoing trial.

The Times of India reported on Friday that 119 Somali pirates nabbed by the Indian coast guard and navy between 2011 and 12 had pleaded guilty to offences brought against them.

“This comes at the fag end of the trial that commenced in late 2012 with 70 witnesses deposing and difficulties caused by the absence of several foreign national witnesses. About 50 pirates, booked for murder, could face the death sentence,” Times of India said in its report.

Hundreds of people in Somali towns of Galkio and El Buur in central Mudug region held peaceful protests against the Indian government and condemned the possible death sentences.

They urged the Somali government to intervene and make efforts to release their citizens in India.

“We are standing here under the boiling sun to tell the world that these people are innocent, they were falsely arrested in India, we need to release our people without any condition,” Hakima Idris, one of the protesters, said.
The Somali Information Ministry in a statement on Sunday disputed the version that its citizens were pirates and termed the proceedings in India a case of “harassment against Somalis”.

“Somali government regrets the neglect, injustice and harassment against Somalia youths those who live around the world, especially in India and Kenya,” the statement said.

“We called [on the] Indian government to stop the harassment and respect the international law and humanity,” the statement added.

The Somali president’s office also made a series of tweets on the issue, saying: “#Somali and #Indian officials are in talks over the fate of suspected Somali pirates in Indian cells.