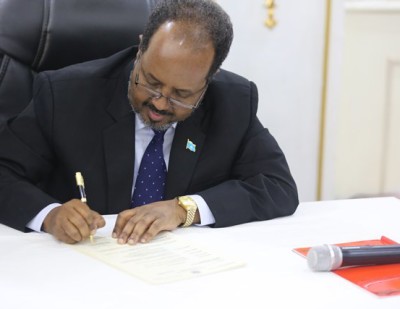 President of the Federal Republic of Somalia, H.E. Hassan Sh. Mohamud signed the Policy of the Human Rights Commission which was recently approved by the country’s Parliament.

The Human Rights Commission will consist of nine members, three of whom must be women. The headquarters of the commission will be in the capital of Somalia, Mogadishu, as the the bill states.

The deputy speaker of parliament Jeylaani Nuur Iikar, who chaired the meeting, announced that members of the house had unanimously agreed to endorse the new bill which was presented to the parliament by the country’s ministry of Women and Human Rights Development.

Somalia has suffered a human rights crisis for the last 20 years, characterized by serious violations of human rights and humanitarian law.

The protection of civilians in the context of the armed conflict, combined with impunity and lack of accountability, is of major concern, but the newly confirmed Human Rights bill will address the above mentioned problems.