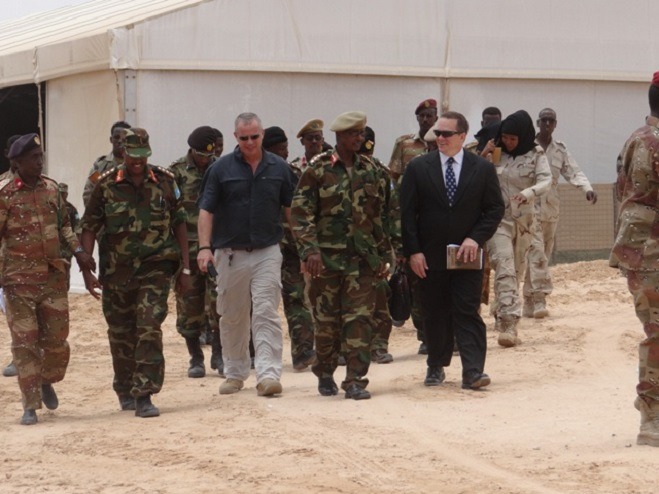 Mogadishu (HAN) May 29, 2014 – Both, Turkish Press and Geeska Afrika Online reported that Somali army chief,  General Dahir Adan Elmi (Indhaqarsho) has survived assassination attempt, an apparent  roadside  bomb attack in Mogadishu.Somali Security officials say the roadside bomb exploded Wednesday as an armored convoy carrying General Dahir Adan Elmi was passing by.The army commander told VOA that he is safe and that none of his bodyguards were wounded in the attack, which took place in the Hodan district, as the convoy traveled to the Defense Ministry.Police conducted a security operation after the blast and arrested nearly 30 people.There was no immediate claim of responsibility.On Saturday, fighters from militant group Al-Shabab stormed the parliament building in Mogadishu.  The bomb and gun attack left at least 18 people dead, including some of the attackers.The al-Qaida-linked group has claimed responsibility for a bombing in neighboring Djibouti that killed at least two people.  The Saturday attack occurred in a restaurant frequented by Westerners.In an audio message, an Al-Shabab spokesman said they were targeting “NATO personals.”  He said the attack was retaliation for France’s intervention in the Central African Republic and for Djibouti’s troops in Somalia.Djibouti, a former French Somali coast, hosts French and U.S. Africom military bases. It has contributed troops to the African Union forces *Amisom)  fighting Al-Shabab in Somalia. Sources: VOA