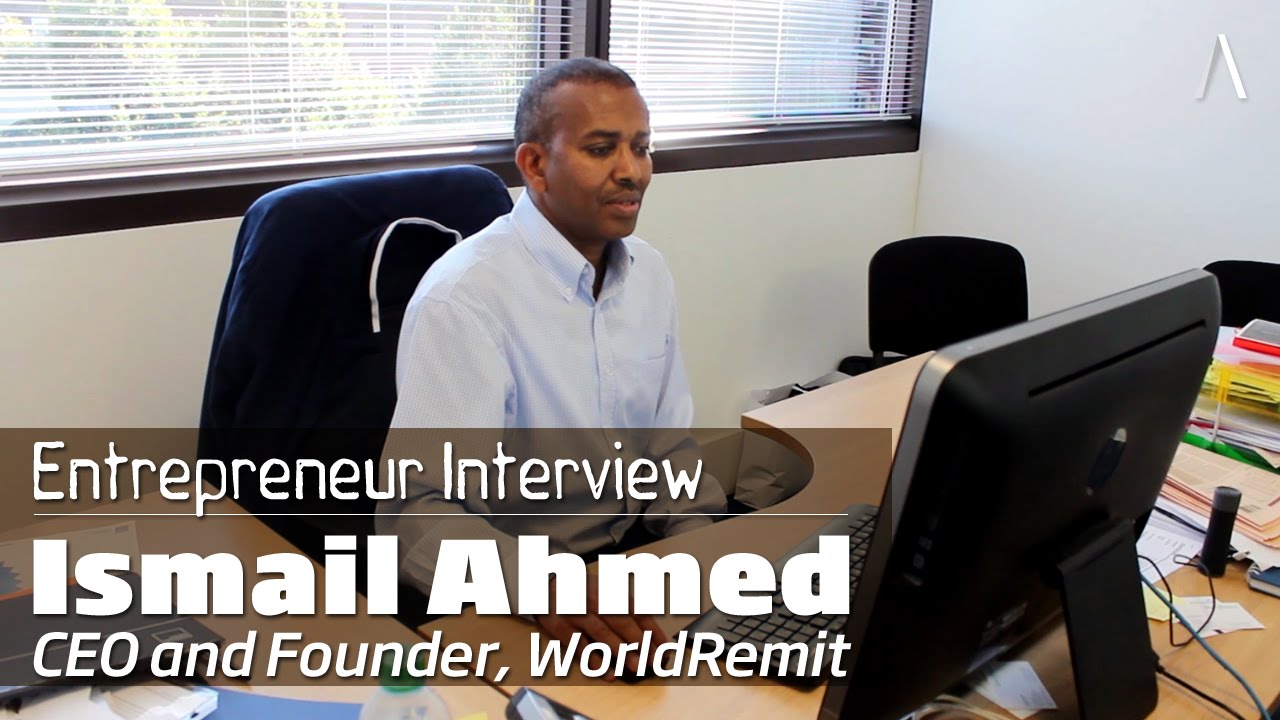 Eight years ago, Ahmed blew the whistle on corruption at the U.N. Development Program in Nairobi, and his boss told him he’d never work again in remittances or development.

This week, Ahmed was recognized by Ernst & Young, one of the world’s big four audit firms, as overall EY Entrepreneur Of The Year for London.

Ahmed’s online money transfer service, WorldRemit, earned revenue in 2015 of $35.8 million US. In 2016 the company is expecting significant growth, thanks largely to the growth of the U.S. market, Ahmed said in an interview with AFKInsider.

The company is licensed in most of the U.S. — about 47 states and territories, Ahmed said.

“The U.S. is not our biggest market but in next couple years we expect the U.S. to become our largest market,” Ahmed said. “More than half our revenue comes from transactions going to Africa. The U.S. has the largest number of Africans.”

WorldRemit processes over 400,000 transactions a month. It is available to senders in 50 countries with transfers to more than 120 destinations across Europe, Asia, Africa, Australia and the Americas.

More than 75 percent of the company’s revenue comes from outside the U.K. Remittances to Africa account for more than half the company’s global revenue.

So why is licensing so important in the U.S. and everywhere else when you’re in the remittance business?

Regulation is integral to the business, and not a place where fintech companies should be trying to cut costs, Ahmed said. Best-in-class compliance and regulation can be a big selling point in financial services.

“When I talk about compliance I mean consumer protection,” Ahmed told AFKInsider. That involves complying with anti money laundering and anti-terrorism laws.

“What happens in fintech, people focus more on what tech can do without recognizing the difficulties in how to comply,” he said. “Particularly with remittances, the systems aren’t always put in place to deal with (money that supports terrorism and money laundering).”

Long before Ahmed became a compliance advisor to the U.N., he helped African companies comply with money transfers. He attended the University of London Business School, where he studied for an MBA. After 9/11 he was doing research at the University of Sussex. One of companies he worked with had been shut down for non-compliance at a time when the remittance business was unregulated.

Ahmed learned it was critical to have compliance systems in place from the beginning in a remittance business.

When he started building the WorldRemit platform, compliance was the major investment in the beginning. The company has been inexistence since 2010. “I took money from angels (investors) who let us decide how to build the business. We only took money from venture capitalists and started growing fast once we put that in place. It is one of the reasons we started licensing in the U.S. in 2014.”

In March 2014, WorldRemit got $40 million in funding from Accel Partners. In 2015, the 6-year-old company was valued at $500 million in a $100-million Series B funding round led by Technology Crossover Ventures (TCV), with participation from Accel. In February 2016, the company secured a $45 million line of credit from U.S. growth fund TriplePoint Venture Growth and Silicon Valley Bank.

Working as an advisor to the U.N., Ahmed had blown the whistle on fraud and corruption at the U.N. Development Program in Nairobi. It resulted in his dismissal. He received threats from within the organisation but ultimately won his case at the U.N. Ethics Committee.

“When I decided to blow the whistle I had a better chance of winning the lottery than surviving the U.N.,” Ahmed told AFKInsider. “It wasn’t expected I would win my case. My boss at the time threatened me and said I’d never be able to work in remittances or development. People respect the U.N. It was a credible threat. I not only won the case but was able to work in remittances.”

WorldRemit has offices in the U.S. Australia, U.K., Canada, New Zealand and Japan.

It started licensing in the U.S. in 2014. The U.S. is one of the most challenging countries to work in, Ahmed said. You have to get a license in each state.

Ernst & Young described Ahmed as an entrepreneur with an impressive story who is disrupting his sector. “Starting from scratch he has overcome adversity, shaken up the market and achieved global impact and success,” said EY event leader Joanna Santinon, according to a Invest In UK report.

Ahmed spoke to AFKInsider about overcoming adversity, of taking on one of the world’s most respected institutions and winning, and how he turned $200,000 from winning his case against the U.N. into a remittance business valued in 2015 at $500 million.

AFKInsider: Looking back, how did your experience at the U.N. affect your achievements?

Ismael Ahmed: I have been interested in remittances since I was a schoolboy in Somaliland. Tens of thousands of men went to work during the Gulf oil gold rush. My brother was one of them and sent us remittances. Remittances really transformed my hometown. One of my relatives was a broker who collected remittance money coming from the Gulf. He’d collect the money and use it to buy construction materials that bypassed the exchange-rate controls. I talked to him to understand how the system worked. It sometimes took three months to get a remittance. We were the recipients. I came to the U.K. during the civil war in Somalia. I became a sender (of remittances) and then I saw the typical migrant experience. It’s something I have been quite passionate about.

After the war remittances rebuilt the economy. It was called trade-based remittances or hawala. In most countries you had exchange rate controls and it wan’t possible to bring dollars into the country. This was a way around exchange-rate control — to buy and import goods, to finance imports basically.

AFKInsider: What is the main challenge in technology you face to keep your company growing?

Ismael Ahmed: Our industry is sill largely offline. We’re talking 90-to-95 percent of remittances going through offline networks. A Kenyan taxi driver in New York City going to a corner shop to send $100 home to Kenya. Travel was one of the first industries that went online. Unfortunately for remittances, people are still going to agents. The challenge for us isn’t what are the coolest gadgets. The challenge is how to convince people traveling an hour to a corner store to go online. How to save time, to overcome financial crimes associated with cash. The industry is facing de-risking. Basically banks are shutting down the bank accounts of money transfer companies. The impact is concentrated on traditional money transfer companies.

In New Zealand and Australia, most of the banks won’t give bank accounts to money transfer companies.

When banks shut down money transfer companies, remittances go underground. We’re interested in the image of the industry and making sure the money people send doesn’t get mixed up with crime. There’s been a lot of cases of money laundering, especially (senders in the) U.S. sending money to Mexico — drug money. The challenge for our industry is how to move cash-based transactions online. When someone’s using an online company there’s an audit trail. If the transaction becomes suspicious there’s a way to track.

AFKInsider: WorldRemit secured a $45 million line of credit from U.S. growth fundTriplePoint Venture Growth and Silicon Valley Bank in February 2016. What are you doing with the money?

Ismael Ahmed: We’re focused on growing the business fast. Relative to Africa we’ve been heavily focused on mobile money. Africa is very important for our business. Globally one third of our transactions go to mobile money accounts. We’re a leader in international remittances. We’re doing business in almost 40 African countries — our aim is to offer the service in all 54 countries. Particularly we do well where there are mobile money services — Nigeria, Zimbabwe, Kenya, Uganda, Cameroon, South Africa, Ghana.

Currently our business is into Africa but today millions of Africans have mobile. Our aim is to enable them to send money abroad. We’re in the process of getting licensed so South Africans can send transfers to other African countries. There is migration within Africa. There’s a lot of remittances within Africa. When we send remittances we’re cashless. Not many people in Africa have credit cards . For us we don’t want to touch cash. How do we work with mobile money operators to move money?

AFKInsider: Mo Ibrahim inspired you. He’s one of the world’s most recognizable advocates for good governance. Did he fund you too?

Ismael Ahmed: Mo has not funded my business but I met him a number of times, first in 2005 at a remittance conference. What was really inspiring was his story. He worked in some of the most challenging countries where corruption was an issue. He proved a lot of people wrong who thought he wouldn’t be able to make it.

AFKInsider: Has anyone tried to bribe you? How do you handle requests for bribes?

Ismael Ahmed: I live in London. I have a team who deals with onboarding. Because of the nature of the regulations we put in place to deal with some of the challenges, nobody has approached me. In Arica it used to take a bit longer to go through the process. Bribes, facilitation fees — I haven’t come across the situation.