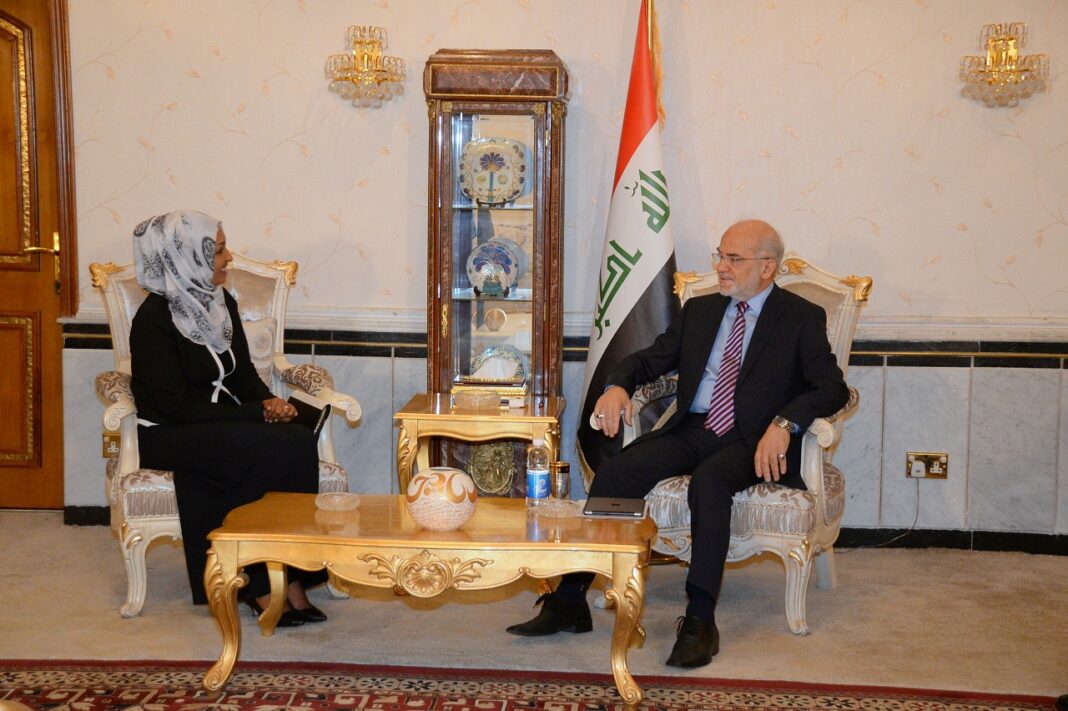 According to Geeska Afrika Online diplomatic sources, Foreign Minister, Dr. Ibrahim Al Ashaiqer Al Jaafari, received  at the headquarters of the Ministry a copy of credentials of the Somali Ambassador to Iraq, Ms. Khadija Al Makhzumi.

For regional strategic alliances, Somali federal government restores diplomatic relations with Iraq by appointing a female ambassador to Baghdad, but the Federal Somali Government has to recognize the diversity of the Shiite political actors in Iraq and shift its foreign policy accordingly. ‪

The file of the Economic assistance and intelligence sharing in Baghdad seems to be a priority for Ms. Khadija. Dr. Ibrahim Al Jaafari announced that both Mogadishu and Baghdad are now facing the challenge of terrorism, a reference to the recent attacks on Shiite mosques in Saudi Arabia. Dr. Ibrahim Al Jaafari also confirmed that Iraq is concerned with the cases of the Somali refugees waiting to repatriate and still in Yemen. The Somali ambassador has not yet moved to Baghdad as she is waiting to finalize administrative and diplomatic arrangements.

Dr. Ibrahim Al Jaafari said Iraqis are convinced that the administration takes the militant threat seriously and that it intends to increase its involvement in stopping the group. Iraq has bought $10 billion worth of arms from the United States, according to intelligence sources in Iraq.

Meanwhile: During the meeting, the Minister reviewed the progress achieved by the Iraqi security forces supported the popular mobilization and tribes in Tikrit, Baiji, and Diyala, stressing the importance of the role played by the international coalition against the terrorist Islamic State (IS) organization and the necessity of boosting the participation of different countries in this coalition.

The Minister reiterated on the importance of halting the flow of foreign fighters into Iraq and joining the gangs of IS.

Dr. Jaafari referred that the Iraqi government and its Premier, Dr. Haidar Al Ibadi, clearly achieved the national reconciliation through the participation of all Iraqi spectrums in the government.

For their part, the ambassadors stressed their countries’ support to Iraq in its war against the terrorist IS and their countries’ keenness on developing bilateral relations with Iraq.
Foreign Minister Delivers Iraq’s Speech at the 42nd Session of OIC Council