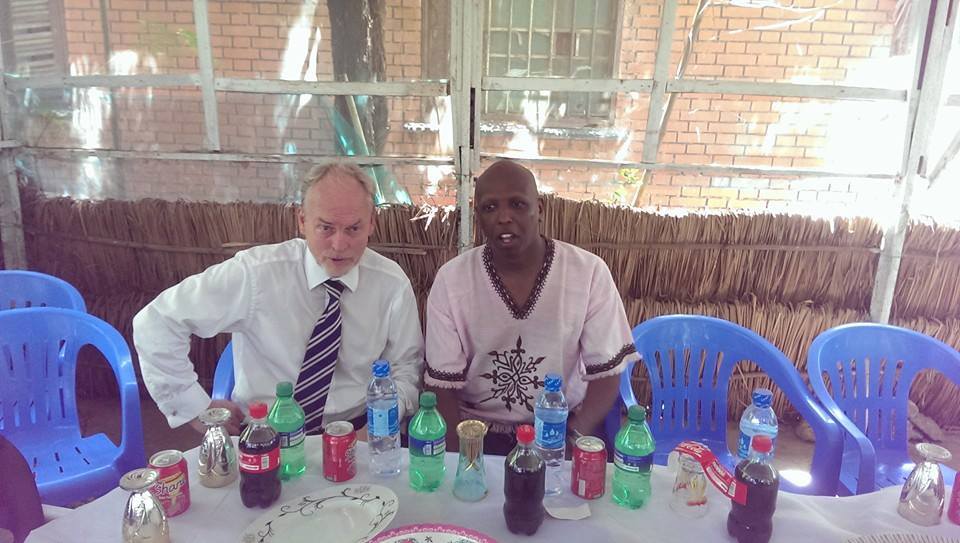 Mogadishu (HAN) May 18, 2014.  Expert Analysis, Your Power & Regional Influence Magazine Opinion Paper by Hassan Farah. The question that ordinary Somalis is asking is that why the UN and the West are showing hypocrisy and double standard in Somalia?

Picture: The United Nations Special Representative to Somalia ambassador Nicholas Kay with Saeed Nabadon has toured Jowhar on Saturday on a fact finding mission regarding the humanitarian crisis in the region.

It is beyond everyone’s believe that the UN and West are discouraging democratic practices to take place in Somalia. On 05 May over 100 MPs called the President of Somalia to resign otherwise he will face impeachment vote in the parliament. Since then the Special Envoy of the Secretary General of UN, UK, EU and US diplomats are even going extra mile to stop the impeachment process. So, why this is happening when we all expect the UN and West to promote democracy and to allow the impeachment process to continue?

Before, I share with you my analysis on this, but first let us look back on what is happening in Somalia right now and whether there were similar practices where UN and West stopped democratic processes in Somalia.
On 5th May 2014 over 100 MPs met and discussed the future of the country. In the end of that meeting MPs issued statement asking the President of Somalia, Hassan Sheikh Mohamud to resign otherwise he will face impeachment process. This was a historic moment in Somalia and it was the first ever in Somali history for such number of MPs coming together to ask the President to resign in public. In 1990 there was similar process but at the time it wasn’t MPs who asked Siad Barre to resign, but it was politicians called Manifesto.

Supporters of the President immediately panicked and started to approach these MPs and see if they can persuade them not to continue the process. The damage has already being done as over 100 MPs and most of them were from Hawiye clan signed the statement (even sub clan of the President were among leaders of the impeachment process, such as Abdulkadir Ossoble, Abdulkadir Moallim Nur, Omar Finish and others). So, supporters approached the Mayor of Mogadishu to help them mobilize people to welcome the President who was at the time in Abu Dhabi. On 7th May, the President returned from UAE and there was huge public demonstration to show the President that he has the support of the people. Radio Mogadishu, the government owned radio reported that the Mayor organized the demonstration. This is obvious that it wasn’t the will of the people, but it was the will of supporters of the President and the Mayor.

On 11th May the Mayor of Mogadishu organized huge demonstration at Banadir Stadium to support the President. Some of the MPs signed the petition said that these kind of demonstrations are not real and they don’t represent the wishes of the people. The MP that I spoke to told me that the Mayor should have spent the money used for the demonstration to provide basic services to the people and to clean streets in Mogadishu, which he said was his duty. The MP continued to say that the parliament will hold accountable to the Mayor for these political interference between Federal Institutions. Another MP called Abdullahi Jama who spoke to BBC said that MPs represent the people of Somalia and it was the wishes of the people that led to assess them the situation and to call the President to resign, which he said was in the interest of the people. Abdulkadir Ossoble and Abdisamad Moallim Mohamud also spoke to media and said that there is no hope if President Hassan were to remain in power, they argue that for two years nothing was done in terms of establishing constitutional court, reforming judicial system, reviewing the constitution, implementing federalism, reconciliation, political outreach to other regions and many tasks that the constitution demands for. These MPs claim that since they represent the people and that the current government is parliamentarian therefore, it is essential that they represent the interest of the people and they want to exercise their values, integrity and democratic rights that Somali people deserve.

Supporters of the President and the Mayor have been very active to try to bribe these MPs so that they can withdraw from the motion against the President. There are strong rumours in Mogadishu that they succeeded in their efforts, in particular when the Minister of National Security came back to Mogadishu, he immediately started talking to these MPs. But the organizers of the petition and the motion claim that they are on course and this is what they believe are good for the country and for the people. Organizers are also putting together strong motion with evidences of serious violations against the constitution and treason from the part of the President.

At the beginning the Prime Minister was happy for the motion as he asked ministers not to talk on the issue in one of the cabinet meetings on 6th May. He said it is not our role to discuss the parliament and the Presidency issues as the statement was not addressed to the cabinet. When the President came back to Mogadishu on 8th May, the PM went to Lower Shabelle region and this was seen a deliberate attempt to avoid welcoming him. But later on, people are certain that the PM is now on board to support the President as he realized that if the President were to go, then he too will go and the fact of the matter that the UN and West put pressure to him to support the President.

Therefore, why the UN and the West are not supporting the promotion of democratic values in Somalia? This is the million dollar question. One would have thought that the UN and West will side with the side that practice democratic values. The SRSG and the UK Ambassador both spoke to media and felt that the crises could drag on for some time, and they worry that the progress made so far and the vision 2016 that is planned could be derailed. So, this is evident that organizers of the impeachment didn’t realize the importance of the international community and they need to convince the UN, West and donors that their mission is precisely to avoid delay and to focus on the vision 2016, then the SRSG and other ambassadors can be persuaded if they see an alternative that can give them confidence. A friend that I spoke to tells me that change is always good and in particular in Somalia where the current perception and the rating of the President is so low. The only way that can restore the hope and the aspiration of the people is a change of leadership. So, the UN and the West need to preach what they practice which is upholding the wishes of the people, values of democracy and a real change that can revive the hope and the aspiration.

This was not the first time the SRSG of the UN and the West silenced the majority and didn’t support the democratic process. For example in 2012 the Parliament voted out the then Speaker of the Parliament. Madobe Nunow at the time was elected as the Speaker, but the then the SRSG and West said similar reasons of what they are claiming now, which is no changes until they finish their business. Again, a prime example is that recently the UN, West and IGAD forced the Government to come out in public and to agree a 3 state region (Lower Shabelle, Bay and Bakol) and after the government making announcements they [UN and West] even went further to hold joint press conference with the minister of Interior. This was against the wishes of the people in Lower Shabelle, as they didn’t choose to be part of Bay and Bakol. The question is why they did this, when in fact they could have given the opportunity for the people in the region to decide themselves.

The government has not finalized the legality on federalism and they have been calling for some time that it is up to the people to decide on how they want to join with other regions. People in Lower Shabelle came out in public and choose to be part of Shabelle State of Somalia which was formed in Afgoye district in Lower Shabelle region. Shabelle State consists of Lower Shabelle and Middle Shabelle regions, as they claim that these two regions have historic ties, share similar culture and land as they were part of Ex-Banadir. Therefore, once again, the UN, West and IGAD failed to promote democracy in Somalia.

The question that ordinary Somalis is asking is that why the UN and the West are showing hypocrisy and double standard in Somalia? This will kill the aspiration of the people; will have dire consequences to the promotion and advocacy of democratic values in Somalia. Therefore, the SRSG, the UK, the EU and US diplomats need to respond to this article, which is also is an open letter to them. Let us hope that they write joint OpEd to address all the above for the interest of the Somali people and to show leadership and responsibility of their actions.  Sources: Hassan Farah