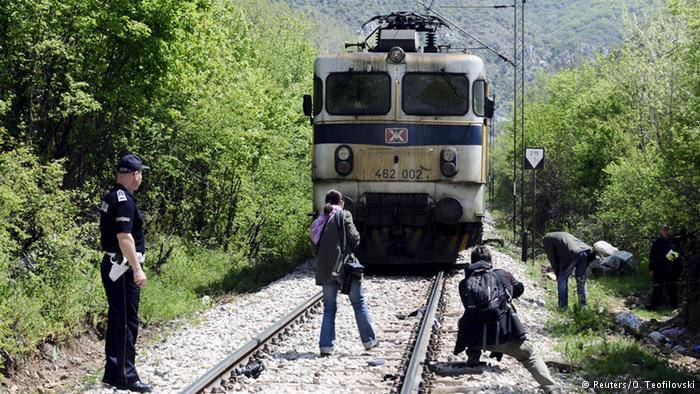 Djibouti (HAN) ) April 25, 2015 – Humanitarian Security News. At least 14 migrants from Somalia and Afghanistan were killed in central Macedonia when they were hit by an international passenger train, officials said on Friday.

The tragedy is the latest loss of life involving migrants seeking a new life in Europe after around 750 people drowned last Sunday when their boat capsized in the Mediterranean.

The train driver reported seeing several dozen people sitting on or near the track late on Thursday but was unable to stop in time, a local prosecutor said in a statement.

Emergency service workers described a “scene of horror with body parts scattered some 150 metres along the railroad”.

“The driver tried to alert them by horn and stop the train. Many managed to escape but 14 were killed,” the statement said, adding that the victims were from Afghanistan and Somalia.

The accident occurred on a mountainous part of the line passing through a canyon near the central town of Veles, so the migrants could not get out of the away.

The bodies were taken to a chapel at the local cemetery in Veles, police said.

In the past six months around a dozen migrants had been killed in similar incidents on the same stretch of line, Stojkovska added.

Migrants from impoverished and war-torn countries in Africa, the Middle East and central and south Asia walk through Macedonia along the line to reach Serbia as they head north from Greece in the hope of crossing the European Union border into Romania, Hungary and Croatia.

According to the latest report of EU border agency Frontex, Macedonian smugglers charge between 120 and 200 euros ($130 and $215) for passage as far as the Serbian border.

Similar networks have sprung up on the Greek-Albanian border, owing to greater security on ferry crossings between Greece and Italy.

Traffickers charge half the price for the land route through the western Balkans into northern Europe, around 1,800 euros compared to 3,000 euros for the direct sea or air route, according to Frontex.

Detections of non-EU migrants on the border between Serbia and Hungary rose by 338 per cent between 2012 and 2013, according to Frontex.

The latest tragedy in Macedonia comes as EU leaders on Thursday agreed to triple the funding for the bloc’s search and rescue operation in the Mediterranean in a bid to curb the soaring number of migrants dying as they seek a better life in Europe.

Already, more than 1,750 migrants have died crossing the Mediterranean this year — 30 times more than the same period in 2014.

Meanwhile, the Tunisian captain of a migrant boat in which at least 700 people drowned was to learn on Friday what charges he will face over the deadly disaster.

Mohammed Ali Malek, 27, appeared before a judge in the Sicilian city of Catania after being accused by prosecutors of causing the tragedy.

The 20-metre (66-foot) former fishing boat Malek was in charge of capsized and sank off Libya in the early hours of Sunday after a collision with a container ship that had answered a distress call.

Malek, who faces a potential indictment for culpable homicide and causing a shipwreck, stands accused of causing the collision through steering mistakes and of allowing the boat to put to sea with far too many people on board.

Prosecutors also want him to be charged with illegal confinement on the basis of testimony from survivors that hundreds of those on board were locked into either the hold or a lower deck.

The skipper is also alleged to have been drinking and smoking hashish whilst in charge of the boat.

Prosecutors have asked for him to be charged only with aiding and abetting illegal immigration and his lawyers were expected to argue that he had been a migrant enlisted to help crew the ship rather than a member of the people smuggling network responsible for organising the voyage. AFP