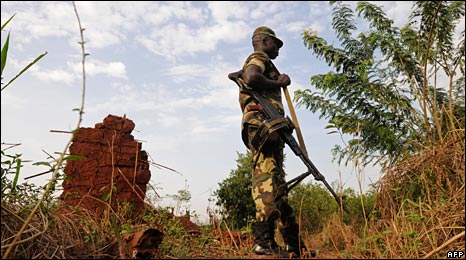 The barracks, which house the elite disciplinary unit of the army, has been sealed off. Confirming the incident Thursday afternoon, Uganda People’s Defence Forces spokesman Col Paddy Ankunda said most of the dead are civilians, children and women believed to be wives of the soldiers in the barracks.

The motive of the shooting spree is still unknown.

Ankunda said in a tweet, “Sad moment Sgt Obua Isaac of military police Makindye has just gone bonkers killed seven people. All of the killed are women and children, one child injured. Sgt Obua Isaac, the killer, has been put out of action”.

The incident though not the first rampage killing spree by a soldier has happened at a time when Uganda is experiencing his security tensions following mass arrests of soldiers and politicians allegedly involved in subversive activity.

At least 30 soldiers were arrested about two weeks ago in the Kyengera suburb also over alleged treasonable acts, the commandant of the Air base garrison at Entebbe Captain Dan Opito Odwee was arrested last week for allegedly plotting a coup and other treasonable acts.

Captain Odwee’s arrest followed close on the heels of arrests of opposition politicians Michael Kabaziguruka, an MP for Nakawa Division in Kampala was arrested on June 8th, released briefly and re-arrested again on among other charges a plot to assassinate President Museveni.

Another politician, Dan Oola Odya was also arrested on June 8th in Gulu on similar charges.

On Sunday, a shootout at the Gulu Central Police Station left a policeman and a soldier dead in what authorities claim was a thwarted attempt by Oola’s supporters to rescue him from the police cells where he was being held. Oola has since been charged on treason offences.