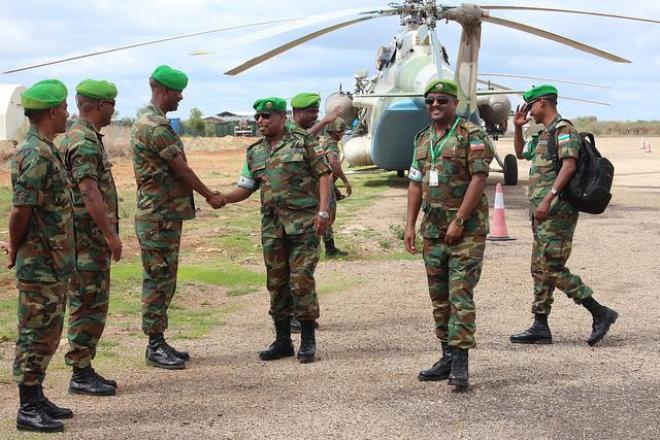 MOGADISHU (HAN) October 14, 2015 – Public Diplomacy Regional Security News.  AMISOM Deputy Force Commander Maj. Gen. Mohammedesha Zeyinu has completed a visit to the newly liberated towns of Baardhere and Diinsor, where he interacted with the troops and challenged them to continue striving for lasting peace in the region and Somalia in general.

The two towns were until July this year safe havens for the Al Shabaab, used as centers for training and recruitment as well as launching attacking on civilians in the Bay, Bakool and Gedo regions.

Maj. Gen. Mohammedesha Zeyinu sought to interact with and motivate the troops as well as gain better understanding of the pertaining issues in the sector.

Addressing the troops in the agricultural town of Bardheere, he commended them for the outstanding work that saw the terrorists flashed out of the area, ending years of civilian torture.

“The operation you conducted to capture Bardheere was a shining victory for AMISOM forces. The Somali people and all partners know the great job you have done to make this happen in this mission. Therefore, I want to thank you very much,” he said.

Speaking in Diinsor, he appealed to AMISOM troops working together with their Somali counterparts to keep up the momentum until the entire Somalia is secured from Al Shabaab.

“The purpose of our mission in Somalia is to defeat and eradicate Al Shabaab, to restore peace and stability in this country, the continent and region, because this enemy is the enemy of the Somali people and East Africa in general. If we do not eliminate this enemy and restore peace and stability, the consequences are clear, the fate of the Somali people is clear. There will be no peace, no stability and no development and the situation will be worse,” cautioned Gen. Mohammedesha.

AMISOM troops together with the local administration are currently conducting awareness campaigns on the operations in the region and role of the population in ensuring peace. They are also appealing for information from the residents, to enable them flash out any remnants of the terrorists from the towns.

The troops have also mobilized former local militia men and women, who will support efforts to maintain peace in the towns upon completion of training.