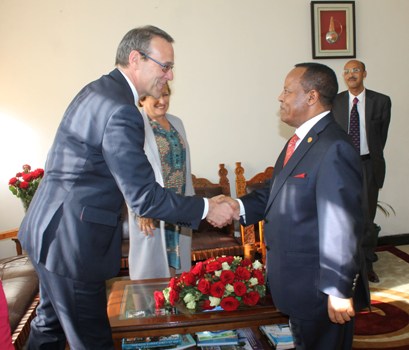 The two sides discussed on the progress achieved in terms of ensuring security and stability in Somalia and exchanged view points on the implementation of the 2016 electoral process.

Sir Simon Macdonald further said Ethiopia has made a significant contribution to the current positive development on peace and stability in Somalia.

The two sides have also exchanged views on the upcoming United Nation’s Refugee and Migrants Summit in New York; in such score, they have reaffirmed their commitment to build on the already outstanding partnership.

Discussions also focused on current situations in Ethiopia. On the occasion, State Minister Ambassador Taye Atske-selassie gave briefings on the recent protests in parts of Oromia and Amhara Regional States. The State Minister shared details on the causes of the recent incidents and the possible way outs that the Government and people of Ethiopia will embark on addressing the situation on sustainable and amicable manner.