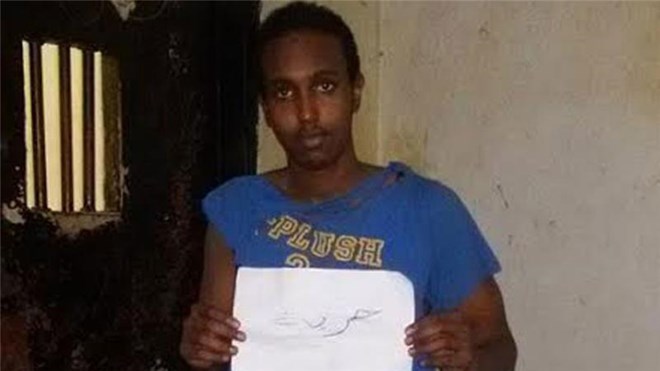 CAIRO(HAN) February 1, 2016. Public Diplomacy and Regional Stability Initiatives News. Campaigners have called on Egypt to immediately release a 17-year-old Somali refugee, who has been detained for nearly six months.Youssef Mohamed Aden was arrested in Egypt on July 6, 2015. A member of a small minority clan, he had fled home after his brother was killed by al-Shabab, an armed group linked to al-Qaeda.

The UN agency for children (UNICEF) has documented at least 25 children among the 50 total documented refugees currently detained in Egypt.

“Most of these minors are usually unaccompanied, coming from the Horn of Africa, while Syrian children are usually with parents.”

The average detention time for a child is between two weeks and a month, Hafez said.

Aden, however, has been held for nearly six months.

After being picked up by Egyptian police, he was placed in the Karmooz detention centre in Alexandria, according to a new report by the Sweden-based Centre for Refugee Solidarity.

With no passport or identification documents to prove his nationality, Egyptian authorities have been unable to deport him.

Since his arrest, Aden has been subjected to several punitive measures, including having his cell phone confiscated, being threatened with deportation and not provided with legal counsel.

“He was seemingly punished for sending pictures of the conditions inside the jail cells and exposing the situation and the deliberate neglect of the Egyptian police,” Alia al-Ghussain, a senior researcher and advocate at the Centre for Refugee Solidarity, told Al Jazeera.

Ghussain explained that Aden has been detained in the same cells as adults, a “widespread” practice that contravenes both international and Egyptian laws.

Egypt is host to an estimated 127,000 Syrian refugees, as well as some 50,000 African and Iraqi refugees, according to the United Nations refugee agency (UNHCR).

Many refugees smuggled through Egypt are fleeing political violence in Eritrea, Sudan and Ethiopia, among other countries – risking their lives to make the perilous journey to seek asylum in Europe or Israel.

Some have been shot, sometimes fatally, by security forces, while others have been tortured by Egyptian and Sudanese human traffickers, according to Human Rights Watch.

Ghussain said that “there has been a recent escalation against African refugees in terms of imprisonment, as well as shooting people on the borders”.

Back in November, Egyptian police were accused of shooting dead 15 Sudanese refugees in the Sinai region as they attempted to enter Israel.

“The police don’t have the capacity, training or knowledge to deal with refugees, and therefore they often don’t know how to de-escalate the situation,” Ghussain said.

Muhammad al-Kashef of the Egyptian Initiative for Personal Rights visited Aden twice in Karmooz and spoke to him regularly through phone calls, text messages and Whatsapp before his phone was confiscated.

However, he could not reach him since he was transferred to another detention centre in Cairo’s Tahrir Square on December 3. “We have tried to visit him since then, but [the authorities] have denied us,” Kashef told Al Jazeera.

Kashef explained that while the conditions of Aden’s detention are common for detained refugees, his case is a difficult one.

“He can’t prove his name or nationality because he doesn’t have a passport, any documents, a personal statement and isn’t registered with the UNHCR,” he said.

“He lived in a very poor community in the desert [in Somalia], and he his name was never registered with authorities,” he said, adding that Aden has not been able to speak to his family since he was detained.

Egypt’s Ministry of Interior was not available for comment at the time of publication.