Home Ethiopia Sayyid Mohammed: And the Role of Poetic Stanzas in his Dervish Struggle 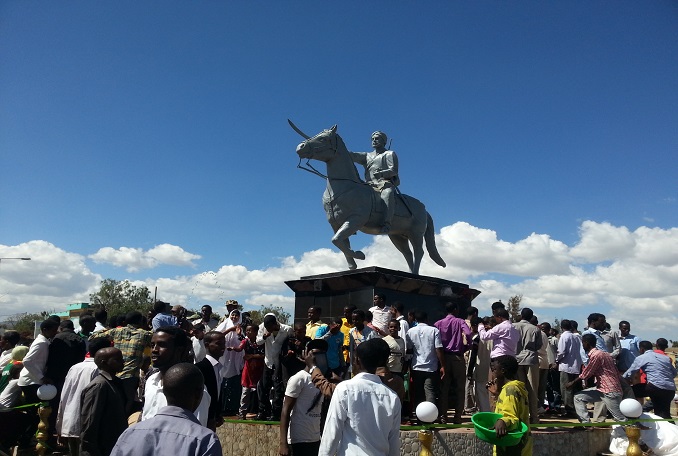 JIGJIGA (HAN) July 26.2016. Public Diplomacy & Regional Security News. By Ali Sheikh. Sayyid Mohammed’s powerful poetic language contained a considerable amount of Arabic borrowed-words. It’s not surprising for the use of Arabic words among the Somalis. The connection with Arabian culture emanates from their Muslim background and their early trade association with Arabian pennisular.

As its mention in one of his writings, the Somalis retained distinctiveness as a separate and extremely vigorous tongue which is unusually rich of oral literature (LEWIS, 2002 3rd ed) Sayyid Mohammed’s poetry life was full of struggle for death, revenge for relief, grief for motivational repulse, jealousy for the search of joy, mystical for manna. It’s now almost hundred years since he passed on, but still Somali people celebrate his poems all around the world. He had a credible influence on the Somali language and invented hundreds of words (i.e. Jaalle) we use to the present today. Scant records exist with regards to poetry skill at his adolescent, Nevertheless, its widely said that, at a later age, all his age-mate born on the famous Gu’gii Gobaysane become prolific poets. Gu——rainy season that starts March/April of every year and ends different period from year to year, but no longer than a month.

Said Mohammed, with cautious manner pioneered a mode of poem, be full of, a wholesome intricate metaphor and rhetorical idioms that entirely aligned with the story and the plot he wishes to convey to his followers (Dervish or Darawiish). He created poetic theatre that permeated, a dense free flow of words in a unique lyric style, (Jiifto, Ligligato and Lalis and etc) that up to today live with Somali poets as a reference and test of time. During the 18th century and well over before that, it was not only a strong traditional, but good ethics for a poet to keep away from any “insulting and outwit” verses/stanzas that spoils poetic morals and serenity. Long before things fall apart, the Somalis maintained good linguistic discipline in poems. They were careful in using fragility of words and the broach of socially outlawed premise or subject matters; such as, directive incitement, verse holding women genital insult both in public and in private, and others considered as a matter of myriad shame. However, defiant individuals among the society have never been exceptional for any rule, for stance, one Ali Dhuuh Aden Goroyo, a poet and diehard contender against the freedom struggle of Sayyid Mohammed was one among others. According to Dervish, Ali Dhuuh Aden was a traitor and colonial collaborator. He never gives up in sending poetry foul/abusive messages to his tribesmen, just to discourage them from the Dervish membership. On the contrary, the intelligent elders of the Dhulbahante clan (Darood tribe) and the pillar-base of the Dervish army who had a maternal connection to the Dervish commander dismisses his calls to abandon the ultra-religious Dervish commander’s companion. Accordingly, Dhulbahante clan took the standpoint against Ali Dhuuh, and was regarded as colonial bootlicker and a man filled with endless grudges. Like always, Ali Dhuuh put on the edge a poem that surfaced as a “tyranny of words” and in turn  tarnished his fame so dreadfully in the eyes of the veteran Somali poet[i] of the time. Much os it was filled with insult of Sayyid Mohammed and his tribe. Here is the main part of Ali Dhuuh’s foul poem;

{Literal Translation according to the stanza order}

May your maternal uncles and Khayre disgust you

Thy Jaam’a, Adan and even Oogle offed you

That my thunderous warbles have  retreated my tribesmen[ii]

Idiot! Those who fend you were not your tribesmen,

They were the likes of Adan-Dhagah, the grudge-holder

Your forefathers’ origin cusps to the bitch race

They plea behind the hitman, the wanton son of Ogaden.

The above stanzas/verses are same of Ali Dhuuh Aden’s insulting month. It did shock and offended the ears of every sane Somali poet of the time, particularly the great men of Dhulbahante. In all occasions Ali Doha was considered as an emotional and corrupt poet whose intent was nothing other than to conceal his thievery immorality with specific reference to the raided camels from Reer Hagar sub-clan of the Dhulbahante clan[iii]

In defense of his tribal ancestry chain of order (Ogaden via Darood) —Sayyid Mohammed vaunted his heredity piety starting from dignified Arabian lineage that end-roots to Prophet Mohammed (PBUH). In a reaction to Ali Dhuuh’s poem, he marked colorfully the ancestral connection to the holy chain of Prophet Mohammed (PBUH) both in faith and origin.here is the reply;

(Literal translations according to stanzas)

Thou Yusuf, be the courier of the runty word,

If Almighty says and you touch the valley

I trust you keep the message tight as it is,

Make sure ye deliver to the point as thou gaze at

That I stand superior in virtue as an Ogaden son,

That I’m the cream laying top of the tribes, the Hashimites

That my lineage sprout from a distinguish elders,

Of their progeny enroots to the extolled Darood.

Next of my kin is the whiff of the universe, Prophet Mohamed (PBUH).

And Ahmed is my acclaimed grandsire,

Even AbrahiimRashiid is my patriarch

Those companions of the prophet are my kith and kin

All and sundry, knows my piety except the Amharas

That, in the other world I expect best of paradise

My friend, aren’t you not low of the lowest caste?

Aren’t you not disgust of God, the dog eater?

Sayyid Mohamed Abdullah Hassan shut up the record as an important historical figure in Somali history and devoted much of his early life to Islamic studies and the struggle for freedom for his people. Beyond anything to boot, he mastered the poetic art of rhythmical composition and of spoken words. No Doubt Sayyid Mohammed was endowed the art of poetic inventiveness, grand thoughts and descriptive beautification of literary work in distinctive metrical form.  What is more, he proved the knowledge and the anthropological setting of the Somalis. He hardly replies or reacts to rival poetic messages up until he collects full data relating to the person who sent the poem. He traces both personal behavior and purity of the sender’s patriarchal order and finds out weaker points to beat his wit to wail. The only venue for the Dervish commander to express his enthusiasm as well as his emotional sentiments was through the poem. In the 19th century, poem was the only means to carry communication.

Sayyid Mohammed was someone who could speak in his poem across cultures and make his followers feel the abundant miseries European imperialist inflicted their faith and values that fueled the savagery revolt against British colonial power. The reminiscence of his philosophy, devotion and sacrifice for the freedom and the initiation of statehood for then balkanized Somali tribes inspired Somalis of the horn for generations. Sayyid Mohammed up to today remains immortal memory as an African hero and as an identity for all Somalis in the horn

For quotes and comments, the writer can be reached at Dhagaweyne3@gmail.com

[1] Abdulahi Ma’alin Ahmed aka Dhoodan in an informal chat mention that Ali Dhuuh breached the noble ethic of Somali poem. Dhoodan kept saying that Ali Dhuuh Adan was never tired sending composure of abusive, incitement, vaunt boosting words which is against the rule of poem even when he grew old and bedridden

[1] His tribesmen is Dhulbahante, also Ali Dhuuh was from the same tribe

[1] Ali Dhuuh raided handful camels owned by Hagar Sub-clan of Dhulbahante clan, the camel were herded by unarmed young boys. The action was totally taboo to raid orphan owned camels in the eyes of the Somali societies even today.