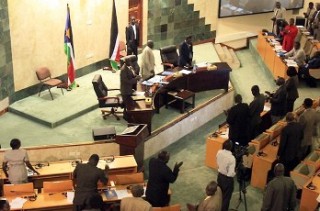 JUBA (HAN) March 15. 2016. Public Diplomacy & Regional Security News. South Sudan lawmakers have requested the finance minister and Central Bank Governor to appear before the national assembly on Wednesday in relation to what they described as poor handling of the economy resulting into high market prices.

Legislators, after a lengthy and heated debate, voted unanimously to seek answers from the two monetary institutions in the country.

“Right now, the prices are skyrocketing in the market and civil servants and soldiers have not received the pay increase promised [by the executives in January],” said Tulio Ayahu, the government chief whip in the National Legislative Assembly (NLA).

Ayahu also backed a proposal by the assembly’s business committee to form an ad-hoc body to handle the economic crisis.

This ad-hoc committee, he said, will coordinate efforts to address the management of auctioned dollars to commercial banks, regulate prices, monitor customs works and report to parliament.

The leader of minority in South Sudan parliament, however, rejected the proposal.

“We are supposed to discuss the problem of skyrocketing prices in the market but I am surprised that I am not seeing the minister of finance and the governor of central bank here,” said Onyoti Adigo Nyikwec, accusing his counterparts of failing to tackle real issues.

The agricultural committee chairperson, Pascal Bandindi said the ad-hoc committee will intervene in the macroeconomic welfare of the country in monetary and physical policies, examine constraints affecting the smooth collection of the non-oil revenue, ensure discipline in budgetary expenditure, oversight on monitory performances and examine areas of investment in natural resources.

Lawmakers opposed Bandindi’s proposal on an ad-hoc body, saying the parliamentary committee of finance and economic planning is capable of doing this work, rather than creating more institutions.

One USD now sells at 37 SSP in black markets, a rate central bank seeks to equalise.

“The only institutions capable of explaining the steps being taken to address the economic crisis are the minister of finance David Deng Athorbei and Governor of Central Bank,” said Oliver Benjamin, chairperson of parliament’s committee for information.