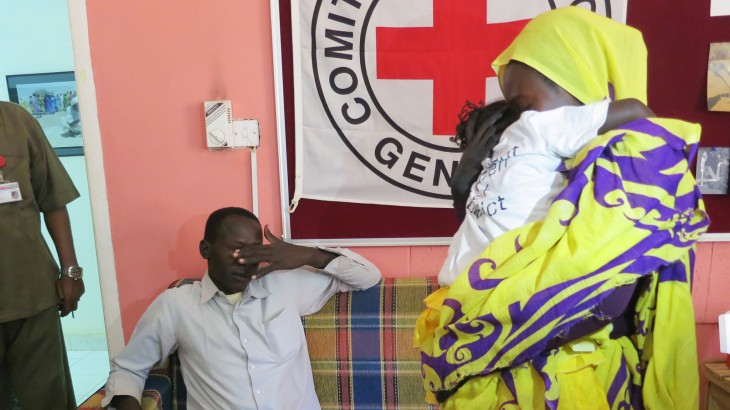 Juba (HAN) October 22, 2015 – Public Diplomacy and Regional Investment Initiative News. When fighting broke out in her village in Blue Nile State, Sudan, Leila was on foot to her grandmother’s house. Much to the dismay of her family, she didn’t come home, so her father eventually turned to the ICRC for help.The day had started like any other June morning. The family was having tea together and for five-year-old Leila* this meant either biscuits or fresh bread with her tea. This morning it was biscuits. A short while later she started the one-kilometre walk to see her grandmother, who lives next door to a shop. Leila always visited her grandmother first before buying biscuits and then heading back home. All the children who got lost during the fighting that day were found within a relatively short time, except for Leila. Mustafa* and Magda*, Leila’s father and mother, were hysterical. “I searched inside ditches, I searched the entire forest. I looked for her in 14 villages,” said Mustafa. “I walked from place to place asking if anyone had seen my Leila. I even searched burning debris, thinking she might be underneath.” “After days of searching, my head was spinning and I didn’t know where else to go,” he continued. “People referred me to the National Council for Child Welfare and I informed them that my daughter was missing.” The Council told Mustafa that the ICRC seeks to reunify families that are separated across borders and would be able to help him.

The call from ICRC comes at last

Working closely together, the ICRC delegations in Sudan and South Sudan eventually found Leila in a refugee camp close to the border in South Sudan.

“Finally, I got the call from the ICRC,” said a relieved Mustafa. “They said they had found my daughter and sent me some pictures of her. Only then was I able to eat again, and my heart rested a bit.”

The ICRC delegations followed up with the authorities in both countries to expedite Leila’s travel and reunification with her family. Before long, an ICRC field officer in Juba accompanied Leila to join her parents in Khartoum, Sudan.

Locating people separated from their loved ones during times of conflict, and reconnecting them with their families is an essential humanitarian service provided by the ICRC. Working as part of a wider network of tracing services, ICRC delegations and Red Cross and Red Crescent Societies in the region help to bring families separated across borders back together.