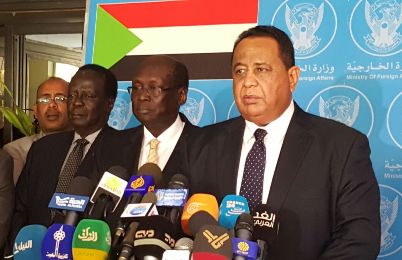 JUBA (HAN) January 7, 2016 – Public Diplomacy and Regional Stability Initiatives News. South Sudanese foreign minister Barnaba Marial Benjamin said relations with Khartoum are historical and should be strengthened for “we are going to be neighbours until the end of the world.”

“We were promised by the government of republic of Sudan that the students from primary education, going to secondary education will not again pay $150 for registration fees for exams. It will not be there anymore. They will pay like any other Sudanese students,” he said of one vital item discussed his five day visit to Khartoum.

“The leadership of President Salva Kiir Mayardit and the people of South Sudan, have shown our brothers and sisters in the Sudan that we want good relations,” he said. “We are to strengthen our relations as I told them. We are going to be neighbours until resurrection, until the end of the world. So it is better now we improve our relations so that the future generation will live side-by-side in peace and harmony,” he added.

Sudan and South Sudan agreed last October to reactivate the buffer zone agreed in the Cooperation Agreement of 27 September 2012, and to redeploy joint monitoring teams along the border. A Sudanese state minister for foreign affaires Monday said the two countries are considering the resumption of trade border between the two countriese. ensuring free movement of goods and citizens across borders, as provided in the Cooperation Agreement.

Khartoum in the past rejected the opening of border before the implementation of security agreements and insisted that Juba should first stop its support to the rebel groups and interfering in its internal affairs. Marial said his trip also explored restarting discussion on oil transit fees which remained at $24 per barrel despite reducing global oil prices.

“The reality of the fact is that the production of the oil is down. We are producing about 165,000 barrels a day and on top of that there is drop in the oil prices,” he said. “There is economic reality in which both countries of course through ministries of petroleum are going to discuss that issue,” he said.

It is not clear when South Sudanese oil minister and Sudan counterparts will meet over the matter. South Sudan now receive less than $5 per barrel when transit charges paid to Sudan are deduced and oil exploring companies are paid, according to experts.