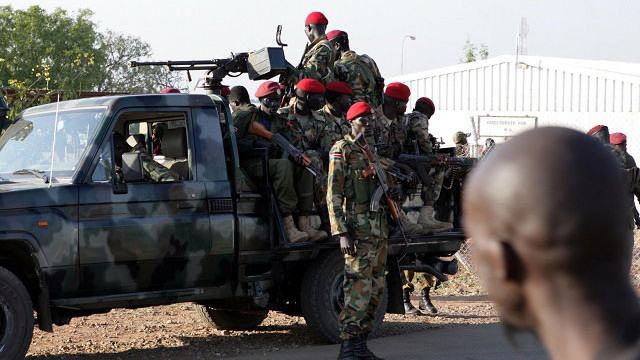 JUBA (HAN) August 2.2016. Public Diplomacy & Regional Security News.  Spokesperson of the leadership of the armed opposition faction of the Sudan People’s Liberation Movement (SPLM-IO), said forces loyal to President Salva Kiir have been defeated in all fronts around Juba and that the SPLA-IO troops are waiting for an order from their commander-in-chief to move on Juba.

Reached by Sudan Tribune on Tuesday morning, James Gatdet Dak has said that “Several hundreds of soldiers” belonging to President Kiir have been killed in the forests in the south, west and northwest of the national capital, Juba, as they tried to hunt for Machar, former first vice president who fled the town three weeks ago.

Machar left Juba with his “small number of troops” after battling President Kiir’s forces for four days in the capital. The former first vice president said he left to save his life, de-escalate the situation in the capital and would return after a third party force is deployed in Juba.

Dak said over 10,000 of the SPLA forces have been defeated in the frontlines with some having now reported to have fled to United Nations protection of civilians cites in Juba, including three military Generals who have taken refuge and refused to go back to the front lines.

But he said only air raids using helicopter gunships is what the government is dwelling on.

“Our forces have defeated President Kiir’s troops in all their frontlines. They have been dispersed in disarray. The government is not telling the truth about what is happening in the forests. Several hundreds of their troops have been killed and dozens of their military vehicles and other logistics captured,” said Dak.

“SPLA-IO forces are in upper hand as we speak and are only waiting for the right time and order from their commander-in-chief to take control of Juba. This will happen soon unless a third party force is deployed in Juba,” he further added.

The South Sudanese army spokesperson was not reachable for comment on these claims.

Asked about SPLM-IO leader, Dak said their, Machar, is safe protected by his forces, saying that all the battles occurred in locations far from where he is situated. Also, he said that the opposition forces have received reinforcements from different locations in the country who have “besieged Juba without the government knowing”.

Dak further claimed that Juba-Yei road and Juba-Mundri road have been closed by their forces, as well as taking control of northwest of Juba in Katigiri.

The spokesperson who said he has been in contact with his boss also announced that Machar has appointed Lt. General John Jok Gai, as Sector Commander for Central Equatoria, where he is deployed to coordinate the operations of the army divisions which are commanded by his junior officers including Major General John Kenyi, Major General Mabie Gaar, among other Major Generals in charge of different frontline locations in the area. (ST)