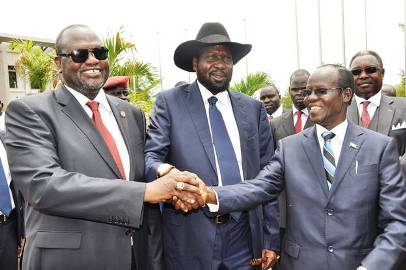 JUBA (HAN) May 5. 2016. Public Diplomacy & Regional Security News. It is important for the parties to the August 2015 peace agreement to cooperate in the implementation of the peace deal which ended the 21 months of conflict in South Sudan, says opposition’s official.

Media official of the armed opposition faction of the Sudan People’s Liberation Movement (SPLM-IO) told Sudan Tribune that a meeting of the political bureau encouraged that the parties implemented the peace agreement in good faith and in cooperation.

“The leadership of the SPLM-IO encourages cooperation and good faith among the parties in the implementation of the Agreement on the Resolution of the Conflict in South Sudan,” said James Gatdet Dak, press secretary of the newly sworn in first vice-president, Riek Machar.

He said the SPLM-IO political bureau met on Wednesday in Juba and highlighted the importance of implementing the deal in restoring stability in the country.

The meeting chaired by Machar and attended by senior members of the party, many of whom were recently appointed as national ministers, discussed progress made in the implementation of the accord as well as pending issues.

A transitional government of national unity was formed on Wednesday last week in which members of the four factions in the agreement formed the coalition.

The other factions include President Salva Kiir’s appointed members to the cabinet, members of former political detainees as well as members of other political parties.