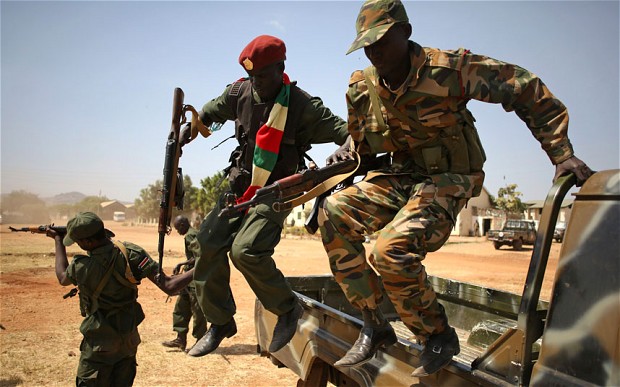 JUBA (HAN) March, 12 .2016. Public Diplomacy & Regional Security.South Sudan’s armed opposition faction warned on Saturday that attacks by pro-government forces in Bahr el Ghazal region could derail commitments made towards the full implementation of the peace accord mediated by regional leaders.

The agreement, which is in its eight months and has curbed violence, though not entirely, has been showing signs of possible collapse, despite repeated expression of commitments by the leaders of the two main warring parties to abide by the terms of the deal and implement it in order to end war and suffering.

Speaking exclusively to Sudan Tribune, Deng Geng, the rebel’s commanding officer under the command of General Dau Aturjong in Northern Bahr el Ghazal area said their forces came under sustained and heavy attacks in a clear violation of permanent ceasefire agreement by the government forces in the area on Saturday morning.

The latest unprovoked attack on the opposition held positions in Aweil North County would undermine efforts to guarantee the continuation of the truce and lead to the collapse of the global supported political process.

The rebel commander explained that government staged an attack on areas where their forces, abiding by the truce, were operating and accused government soldiers of allegedly deploying heavy artilleries in those areas causing many civilian casualties.

Multiple South Sudanese military sources and local officials on Saturday confirmed in separate interviews with Sudan Tribune that the army has indeed carried out attack on the opposition held positions in violation of the peace deal.

Officials at defence ministry declined to comment and no official statement was released by either the office of the chief of general staff of the Sudan People’s Liberation Army (SPLA), which is the official army of South Sudan, Paul Malong Awan or the governor of the area, Rizik Zackariah Hassan, who has not been in good working relationship with the chief of general staff over political and administrative matters. Awan indicated interest to continue to remain as the overall head of the ruling Sudan People’s Liberation Movement (SPLM) branch offices for Lol, Aweil State and Aweil States.

The idea has, however, been rejected by Governor Hassan and his supporters. This, according to several officials, has angered him since it reduces his support base.

Local and national officials say Awan has now indicated readiness to fight for removal of Hassan, including looking for any situation that would compel the president to remove him from the office. One of the strategies has employed to remove Hassan from the office, according to officials, is to cause insecurity at the border with Sudan so that a road coming to Aweil north from Eastern Darfur is not used by the traders and to stop the movement of goods and people to and from either side of the country.

This, analysts say, would deprive local authorities and the state government of revenues from commercial activities at the border with Sudan, thereby shifting the traffic to his Aweil East state and subsequently cause tension and insecurity in the area to influence removal of governor when insecurity has become a threat to national security.

“You don’t know Malong. This is the plan he is working on it and he wants to achieve it at any cost. Now he has two strategies in place already. He wants to cause insecurity in Aweil north by instructing local commanding officers to attack SPLA-IO forces in the area so that the SPLA-IO reacts and when there is a fighting there will be insecurity and the road will be closed. When the road is closed, the local authorities and state government will be deprived revenues,” a lawmaker at the national legislative assembly in Juba representing Aweil North told Sudan Tribune.

“The government of Sudan will also react and the reaction of the government of Sudan will not be taken lightly by the government of the republic of South Sudan. And when it is not taken lightly, the result will be removal of the state governor, which is what he wants. He had instructed former Aweil county commissioner, Kuol Athuai Hal to close the border. When this idea was opposed by the state authorities and even by many government officials here in Juba, he decided to order the army to attack the SPLA-IO forces today,” he added.The legislator called on President Salva Kiir to control Awan so that peace is not derailed. Under the accord which president Kiir signed with the leader of armed opposition, Riek Machar as well as other stakeholders in the peace agreement last year, fighting should cease so that aid can reach civilians. Natives and local officials in Gok Machar, the administrative headquarters of Aweil North County, explained in series of interviews on Saturday that they have seen a line of military vehicles moving towards the direction of Sudan and later heard explosion of heavy gunfire.

Several leading officials of armed opposition said the attacks caught their forces unaware and became more intense in the afternoon after their forces had regrouped and pushed the government forces away.

The armed opposition official, who is part of the advance team in Juba, said they have informed Joint Monitoring and Evaluation Commission about the incident as they await hearing about these violations at the time their forces were preparing to go to Juba in preparation for formation of transitional government of national Unity.

“We are awaiting the response of Joint Monitoring and Evaluation commission to these violations. We have informed and the situation is in the balance now and self-restraint will not last long. If they (government forces) launched an attack on the position held by forces again, then our forces have the right to fire back in self-defense and this will not be one or two day activities because the government has intention to derail the peace already”, said the armed opposition official in Juba.

“The decision is to remain quiet, not to do anything, and I believe we will stick to the truce,” he said of the commitment of armed opposition leadership. We came in order to implement the peace because war is not in the interest of people and the country. You now know how the living condition is deteriorating because of war”. We want it to stop so that our people return to their homes and begin to cultivate and rebuild their lives again. This war was imposed. Nobody wanted it”, he said.

Analysts say the motive of the attack on armed opposition forces in Northern Bahr el Ghazal is to push them away from the area so that their positions are not found by monitors of Joint Monitoring and Evaluation commission currently in Aweil town.

The attack is therefore seen as a political strategy to back up government position in the security arrangement which denies the presence of the forces of armed opposition in Bahr el Ghazal and Equatoria regions, despite having key figures in rebellion.