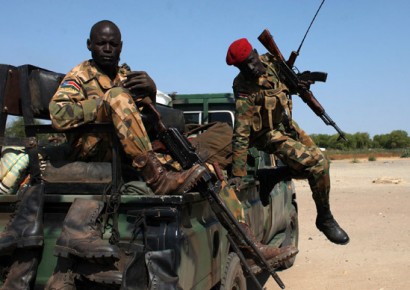 “The Government forces attacked our cantonment areas in Northern Bharel Gazal yesterday [Friday] at 7:00AM. They attacked Kangabar County in Northern Bhar El Ghazal and pushed out our forces this morning [Saturday],” the statements reads in part.

“This is an indication that the South Sudan government is not serious to implement the security arrangement. This is a serious violation that SPLA/IO forces may not go to Juba as expected if the government continue with its military aggression,” the statement continues.

In the document, rebels alleged that government soldiers could be seen moving from Wai to Bazia, a town the SPLA-IO says is now a place where the two rival forces wage intense fighting.

The armed opposition also accused Juba of preparing “full scale war” against the SPLA-IO’s forces, adding that government troops are moving out of Leer County of Unity State to Port Adok in an attempt to try to push rebels out of riverbank of the Nile.

Numerous media reports suggest that South Sudan’s rival forces have recently been trading accusations of peace violations, raising fear whether or not the internationally brokered-pact will stick.

Pagak calls on South Sudan’s peace monitors and the international community to investigate what it described as “peace violations” committed by Juba.