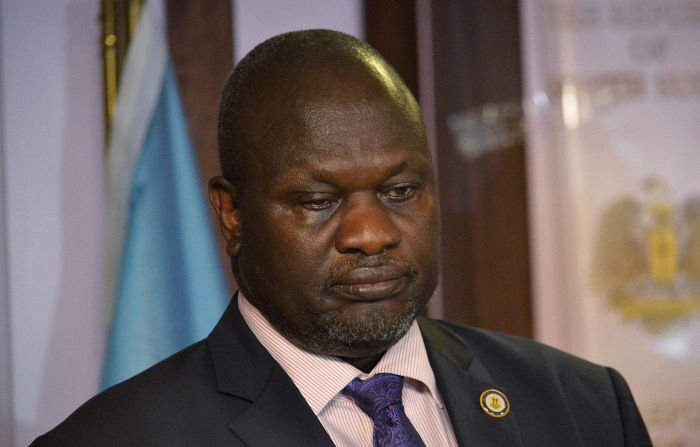 A senior rebel officials said Machar was stopped by the Ethiopian authorities upon his arrival from South Africa at Bole International Airport in Ethiopia and forced later to board another flight back to Johannesburg.

The rebel official, who preferred anonymity, said the rebel leader was heading to the SPLM-IO headquarters in Pagak near the Ethiopian border.

Machar was detained at the airport in Addis Ababa for four and half hours and was later advised either to board back to South Africa or risk being deportation to Juba,’’.

Last October, the deposed first vice president left Khartoum to South Africa to for medical treatment. He had arrived to Khartoum from the Democratic republic of Congo after clashes in Juba between his troops Juba

The Security Council members are considering a draft resolution to impose an arms embargo and additional targeted sanctions that could be brought to a vote as early as this week. The Associate Press disclosed that the U.S. proposed to impose travel bans on Machar and freeze his assets.

Washington blamed him for issuing a statement on 25 September 2016 declaring war on President Salva Kiir’s government following a meeting held in the Sudanese capital.

Several sources from the armed opposition reached by the Sudan Tribune said their leader was safe, but declined to disclose his whereabouts.

Some officials claim Machar crossed into South Sudan, while others said the rebel leader returned safely back to South Africa.

Thomas Magok Chuol, SPLM-IO representative to Uganda confirmed to Sudan Tribune that Machar had indeed returned back to South Africa.

“Yes, it is true Dr. Riek Machar has been told upon his arrival in Ethiopia to return to South Africa. It is not yet known the reason behind the decision,” he said.