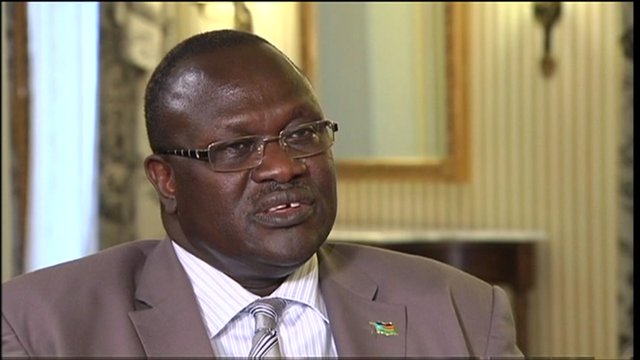 JUBA (HAN) January 27, 2016 – Public Diplomacy and Regional Stability Initiatives News. Leader of main armed opposition faction in South Sudan, Riek Machar, has concluded his two-day visit to Uganda during which he held a closed door meeting with President Yoweri Museveni over a host of issues affecting South Sudan and the region.

The visit to Uganda by the leader of the armed opposition faction of the Sudan People’s Liberation Movement (SPLM-IO) is the first of its kind in two years following the outbreak of violence in South Sudan in which President Museveni’s forces involved.

His official spokesman, James Gatdet Dak, has confirmed to Sudan Tribune that Machar returned to the Ethiopian capital, Addis Ababa, on Tuesday evening.

“True, he has returned to the Ethiopian capital, Addis Ababa, this evening,” he said on Tuesday when reached by phone.

Dak said the interaction between Machar and President Museveni was cordial during a closed door meeting with participation of his wife, Angelina Teny, an outright politician who chairs national committee for defence and security.

The two leaders discussed Uganda’s role in the implementation of the peace agreement which Machar signed in August last year with President Salva Kiir and other parties. They also discussed regional peace and security.

The opposition leader’s press secretary also said besides discussing the implementation of the peace agreement, the two leaders also “opened a new chapter of relationship” between their respective movements or parties, the National Resistance Movement (NRM), which is the ruling party in Uganda, and the Sudan People’s Liberation Movement in Opposition (SPLM-IO), which spearheads democratic and institutional reforms in South Sudan.

According to a press release issued on Tuesday by the SPLM-IO leader, Riek Machar, he said an agreement was reached to work together by starting a new page in relations between the two sides.

The two sides have also agreed on consolidation of peace in the region through the implementation of Agreement on Resolution of Conflict in South Sudan (ARCISS).

The issues discussed, according to the press release, include the controversial 28 states and how it is in violation of the ARCISS, and how it has impeded the formation of transitional government of national unity.

The other issues Machar mentioned are the lifting of the state of emergency which he said is restricting the movement of the opposition’s advance team and the implementation of provisions in the ARCISS regarding Sudanese rebels.

The SPLM-IO chief has also responded to a statement issued by President Salva Kiir with regard to normalizing relations with Sudan.

He welcomed President Kiir’s initiative, but however said the process of normalization ties with Khartoum should be expedited through the full implementation of provisions in the ARCISS.

He added normalization process should also be based on the implementation of the cooperation agreement signed in September 2012, which included the creation of a buffer zone along the North-South Sudan common boundaries.

“The SPLM-IO would like to take this opportunity to reiterate our full commitment to the implementation of the ARCISS in letter and spirit,” Machar said.

Machar left the Ethiopian capital, Addis Ababa, for Uganda on Sunday night on the invitation of President Museveni.

The meeting between Machar and Museveni came only days after the two SPLM warring factions failed to form a transitional government by the Friday dateline set by the Joint Monitoring and Evaluation Commission (JMEC).

Machar previously met with Museveni in Khartoum in September 2015, but this was his first visit to Uganda since war erupted in the young nation in December 2013.

Meanwhile members of Machar’s delegation who had earlier been blocked in Juba from travelling to Kampala were allowed to leave and reached Uganda Monday evening.

On the other hand, Dak said the Former Vice President and First Vice President designate, Machar, will participate in the upcoming African Union (AU) summit of the heads of state and government to discuss the status of the implementation of the peace agreement.