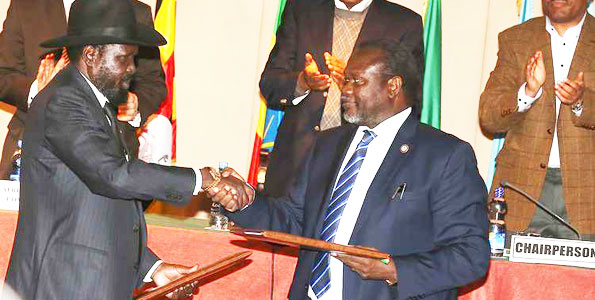 The Federal Democratic Party/South Sudan Armed Forces (FDP/SSAF), the renamed group that split from Machar in July last year, on January 4 sent a delegation of ten to Juba from Nairobi to launch what it calls South-South Dialogue. The delegation, led by Nyuol Duk, will present its demands to President Kiir whose government appears sympathetic to its inclusion.

“We want a comprehensive peace involving all those with grievances and not a compromise that is simply meant to share power. We did not take up arms so that Dr Machar can become the vice president but to address all the issues that has seen South Sudan remain in constant conflict,” said Gen Nyang at a ceremony that saw the group sign an undertaking of goodwill with the Juba administration represented by Major-General Paul Nang Majok.

In its memoranda to be presented to President Kiir, FDP/SSAF wants the killings of about 50,000 Nuer in Juba in December 2013, when the war broke out, be addressed; the prosecution of 75 public officials accused of corruption by the government; the restitution of the monies that has been looted from the government between 2006 and 2013.

They also demand that the peace agreement address the issue of constant insecurity and how to govern the country after 21 months of disruption. The group —comprising six generals and political leaders— broke away from Dr Machar after Gen Nyang and Gen Gadet were relieved of their positions. They accused Machar of seeking power for himself. However, Gen Nyang said in an interview with The EastAfrican that they were not interested in positions.

Maj-General Majok, representing the government, said Juba had also expressed concerns that the South Sudan Peace Agreement had left out other armed groups and that is why there is still fighting in some states. “The president had made a commitment to incorporate all those who have taken up arms because of various grievances. The government is ready to address the issues raised for the sake of peace in the country,” said Maj-General Majok.