Home frontpage S.Sudan Plane Crash Kills At Least 41 on Board & on Ground 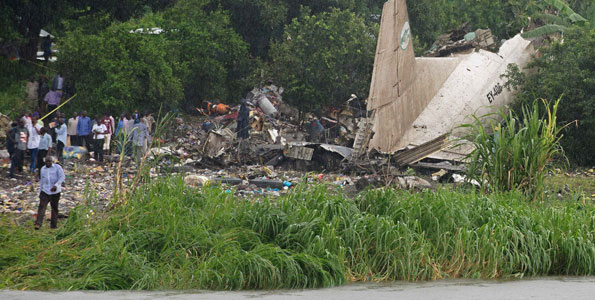 Juba (HAN) November 5, 2015. Public Diplomacy & regional Security. A Russian-built cargo plane with passengers on board crashed on Wednesday after taking off from the airport in South Sudan’s capital, killing at least 41 people on the flight and on the ground, an official and a Reuters witness said.

A crew member and a child on board survived, presidential spokesman Ateny Wek Ateny told Reuters.

Shortly after taking off from Juba airport the plane came down on the banks of the White Nile River, leaving a tail fin and lumps of fuselage strewn in vegetation close to the water.

The plane may have had about 20 people on board, including crew and “probably” 10 to 15 passengers, Ateny said, but added: “We need to confirm how many people were on board.”

A police officer, who did not give his name because he was not authorised to speak to the media, told Reuters at the scene that at least 41 people died, but said the number could climb. The Reuters witness said he saw 41 bodies at the site.