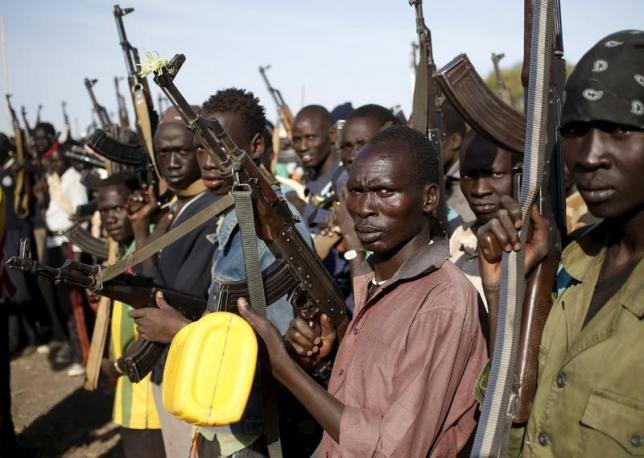 JUBA (HAN) January 27, 2016 – Public Diplomacy and Regional Stability Initiatives News. The United Nations Security Council should place an arms embargo on South Sudan, while the oil-rich country’s President Salva Kiir and a rebel leader qualify to be sanctioned over atrocities in a two-year civil war, U.N. sanctions monitors said in an annual report.

The confidential report by a U.N. panel that monitors the conflict in South Sudan for the Security Council stated that Kiir and rebel leader Riek Machar are still completely in charge of their forces and are therefore directly to blame for killing civilians and other actions that warrant sanctions. A copy of the report was seen by Reuters on Monday.

The 15-member Security Council has long-threatened to impose an arms embargo, but veto power Russia, backed by council member Angola, has been reluctant to support such an action. Russia’s U.N. Ambassador Vitaly Churkin said on Monday he was concerned that an arms embargo would be one-sided because it would be easier to enforce on the government.

The panel asked the council to blacklist “high-level decision makers responsible for the actions and policies that threaten the peace, security and stability of the country.”

The names of the individuals the panel recommend for sanctions in the form of an international travel ban and asset freeze were not included in the body of the report. But a diplomat familiar with the contents told Reuters that a highly confidential annex calls for blacklisting both Kiir and Machar.

A political dispute between Kiir and Machar, who was once Kiir’s deputy, sparked the civil war. But it has widened and reopened ethnic fault lines between Kiir’s Dinka and Machar’s Nuer people. More than 10,000 people have been killed.

The panel wrote that “there is clear and convincing evidence that most of the acts of violence committed during the war, including the targeting of civilians … have been directed by or undertaken with the knowledge of senior individuals at the highest levels of the government and within the opposition.”

However, they said the government appears to have been responsible for a larger share of the bloodshed in the country in 2015.

“While civilians have been and continue to be targeted by both sides, including because of their tribal affiliation, the panel has determined that, in contrast to 2014, the government has been responsible for the vast majority of human rights violations committed in South Sudan (since March 2015),” the U.N.’s panel coordinator, Payton Knopf, told the Security Council sanctions committee on Jan. 14, according to prepared remarks circulated to council members.

The South Sudan mission to the United Nations in New York was not immediately available to comment on the report.

U.N. peacekeepers in South Sudan are also “regularly attacked, harassed, detained, intimidated and threatened,” the monitors said in the report.

The conflict in South Sudan, whose 2011 secession from Sudan had long enjoyed the support of the United States, has torn apart the world’s youngest country. The U.N. panel reported that some 2.3 million people have been displaced since war broke out in December 2013, while some 3.9 million face severe food shortages.

The U.N. report described how Kiir’s government bought at least four Mi-24 attack helicopters in 2014 from a private Ukrainian company at a cost of nearly $43 million.

“They have been vital in providing an important advantage in military operations, have facilitated the expansion of the war and have emboldened those in the government who are seeking a military solution to the conflict at the expense of the peace process,” according to the report.

Knopf told the council that Machar’s rebels were trying to “acquire shoulder-fired anti-aircraft missiles to counter the threat of attack helicopters, specifically citing the need to continue and indeed escalate the fighting.”

Both sides signed a peace deal in August but have consistently broken a ceasefire, while human rights violations have “continued unabated and with full impunity,” the panel wrote.

The panel said that almost every attack on a village by the warring parties involved the rape and abduction of women and girls and that “all parties deliberately use rape as a tactic of war, often in gruesome incidents of gang rape.”

Knopf told the council committee that the human cost of the war was comparable to the conflicts in Syria, Iraq and Yemen relative to South Sudan’s population of 12 million. And he said there was “a real risk of even larger scale mass atrocities within South Sudan.”