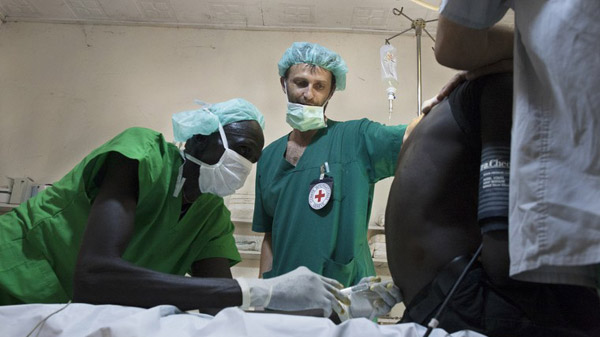 The disease reportedly has symptoms that include bleeding, fever and vomiting with effects similar to Ebola, but laboratory tests show that it’s not.

“The lab results are not consistent with the symptoms, and that is what is concerning,” Rohit Chitale, an epidemiologist with the United States-based Centers for Disease Control and Prevention (CDCP), told the UN news agency (IRIN).

South Sudan, according to the World Health Organisation (WHO), has since late December, had 51 reported cases of “undiagnosed haemorrhagic fever syndrome”. All cases, WHO said, are from two counties in the northwest: Aweil North, where 45 people were infected and 10 died; and Aweil West, where there have been six cases, none fatal.

The spread of the disease, WHO said, could have been witnessed during the North-South Sudan border movement.

“Because of frequent population cross-border movement between Sudan and South Sudan, the risk of international spread of the disease cannot be ruled out,” it stressed.

Meanwhile of the 33 blood samples taken from South Sudan to WHO laboratories in Uganda, Senegal and South Africa, five of them turned up positive for onyong-nyong, three for chikungunya, and one for dengue, said the WHO.

“Those mosquito-borne viruses, however, do not explain the 10 deaths. All samples tested negative for Ebola and Zika,” it said.

“Further laboratory testing is ongoing that may confirm the causative agent,” it further added.

The health sector in South Sudan is grossly underfunded, with the government only allocating 4% of its Gross Domestic Product (GDP) to health 2013, according to the World Bank.