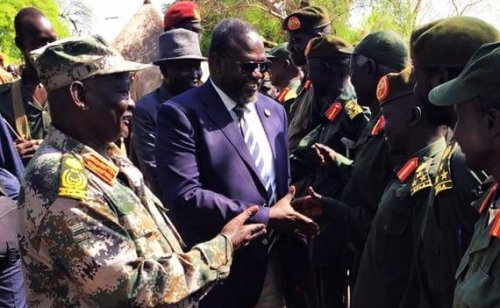 JUBA (HAN) April 19, 2016. Public Diplomacy & Regional Security News.South Sudan government has now accepted troops of the armed opposition faction (SPLA-IO) to travel to Juba from the Ethiopian town of Gambella the rebel’s chief of general staff, ending days of a stalemate and delays over the matter.

The troops will travel to the South Sudan capital with the armed opposition’s chief of general staff, General Simon Gatwech Dual ahead of rebel leader, Riek Machar.

Juba government had earlier refused to allow nearly 200 armed opposition soldiers, resulting into delays in the arrival of the first vice president designate, Machar, when a plane to carry them to Juba was denied landing permission on Monday and Tuesday.

“We have received reports today [Wednesday] that the government has finally agreed that 195 troops would accompany to Juba the chief of general staff of the SPLA-IO, General Simon Gatwech Dual,” Machar’s spokesperson, James Gatdet Dak told Sudan Tribune.

The troops and the army chief were stranded at Gambella airport with their weapons.

Dak said if the troops and their weapons were now allowed into Juba, then the armed opposition leader will follow, hinting Machar could travel to Juba on Thursday morning.

The United States administration on Tuesday criticised the armed opposition leader of lacking commitment to the implementation to a peace agreement signed in August 2015.