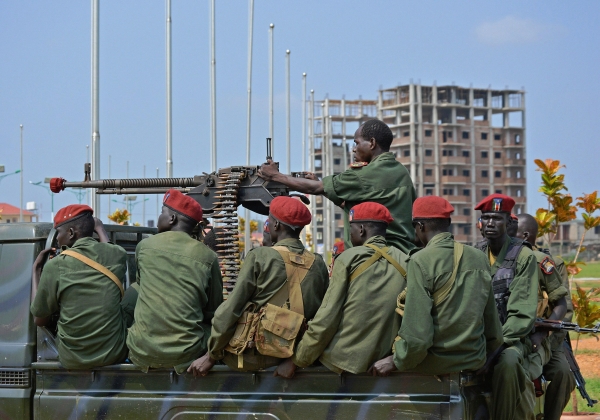 May 12, 2016 (JUBA) – General Gathoth Gatkuoth, a former rebel commander who defected and formed a separate group from the armed opposition of the Sudan People’s Liberation in Opposition (SPLM-IO), under the leadership of the First Vice-President, Riek Machar, has written another letter asking President Salva Kiir to intervene in his capacity as the head of state and advice his deputy in government Machar to restraint and regulates the conducts of his guards, allegedly to avoid armed confrontations.

“Your Excellency for peace and security of Juba town to be maintained, I am asking your Excellency to advice the first vice president to restrain and regulate the conduct of his bodyguards, particularly in public places, to avoid further confrontation and insecurity in the capital of South Sudan”, partly reads General Gatkuoth’s letter to Kiir.

He claimed that his guards were assaulted by the guards of the first vice president at the church compound last Sunday while attending prayer services in capital, Juba.

“Your Excellency it is with great disappointment that I am writing this letter about the unfortunate assault attempt by the first vice president guards towards my guards. This embarrassing situation was carried out in a clear view of congregation of church on 8th may, 2016”, the letter adds.

The 9 May letter, is one of the series of dossiers Gatkuoth has written to Kiir seeking his attention to issues he has been raising against Machar under whose leadership he served as one of the commanding officers at the start of the conflict in 2013.

Gatkuoth was commanding officers of SPLM-IO forces that twice captured Malakal from pro government forces at the height of conflict in 2014. Later, with Peter Gadet and several officers, Gatkouth witched allegiance from Machar In 2015, accusing him of having not equipped and led the movement well to effect the regime change through armed struggle.

They also accused Machar of having succumbed to the global pressure to sign the 2015 peace agreement with the government even though the deal did not address the root cause of the conflict and vowed to continue with the struggle.

However, Gatkuoth and several officers entered into separate arrangements with the government and returned to the country under unclear terms and has since not been given any assignment though he and his group are being accommodated and fed by the Juba government. They also have maximum security with guards assigned to them.