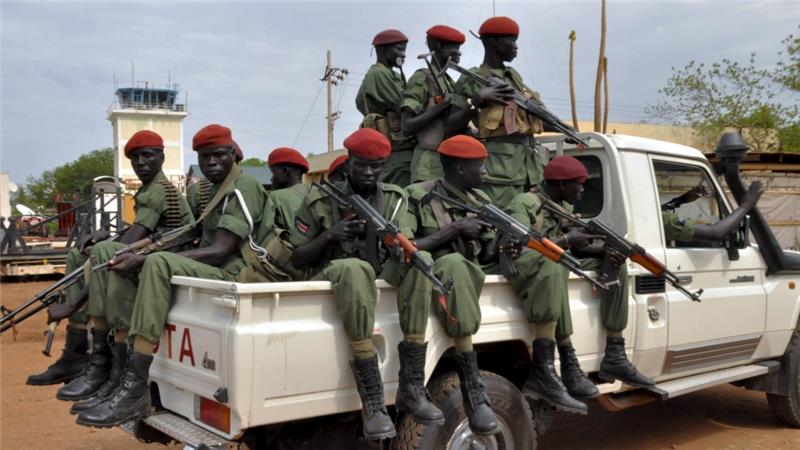 South Sudan defence minister, Kuol Manyang Juuk, and deputy chief of general staff for administration and finance from the armed opposition faction of the SPLA-IO, General James Koang Chuol, reassured the public of the commitment of the two sides to control and prevent the situation from escalating further. They said it was now calm in the national capital, Juba, after the Friday’s clash and people should therefore resume normal activities in the town.

The gunfire started at the presidential palace at around 4:20pm on Friday even as President Salva Kiir and his two deputies, Riek Machar and James Wani, were in a meeting to discuss a previous clash in which five government soldiers were killed at the main crossing point at Gudule, located west of Juba.

The circumstance provoking the firing remains unclear. Both President Kiir and his first deputy in government, Riek Machar, denied any knowledge of the cause of the fighting and urged their commanding officers to restrain their forces.

The two sides also never released an official statement giving the casualty figures, though hospital sources and military officers involved in verification of the bodies give conflicting figures.

Government sources claimed to have counted 180 dead bodies just outside the presidential gate south of one of the main entrance sites.

Multiple military medical personnel at the SPLA military hospital told Sudan Tribune on Saturday that they did not sleep as they were receiving lots of soldiers with gunshot wounds, most of whom in critical condition seeking immediate attention.

“We did not sleep the whole of yesterday [Friday] night. We received more [than] 58 soldiers with gunshot wounds by around 8pm yesterday evening and received 30 others this morning. We have now run out of beds,” a military medical officer told Sudan Tribune on Saturday when reached to comment on the number of casualty figures they have received.

He said others were taken to the main Juba Teaching Hospital due to lack of beds for admission and other medical care and attention.

A medical officer at the main teaching Juba hospital said the hospital has received 42, including additional 8 fighters who died on the way while being taken to the hospital due to severity in bleeding.

He also confirmed having personally seen at the mortuary 92 dead bodies, which he said were taken to the rest room by heavy military trucks.

In a separate interview, a military medical officer at the SPLA military hospital said they received more than 80 dead bodies, some of whom have been identified and taken by their relatives.

In an attempt to calm down the situation, defence minister, Kuol Manyang Juuk, said people can now resume their normal duties in Juba. He admitted many people were killed but could not provide details.

“The issue of figures which you are asking for confirmation is not important now. What is important is that the fighting has stopped. We do not know the number of casualties because it is not the first thing now. The first thing is to calm down the situation so that people can resume normal lives,” defence minister Juuk told Sudan Tribune when reached on Saturday.

The minister called on the public to remain calm and go back to work, saying nothing should prevent them from going to work as usual because they need to work to get their own means for survival.

Another military officer loyal to the SPLA claimed that more than 100 government soldiers were killed and nearly 30 civilians also died in the cross fire.

Officials of the SPLA-IO on their part said about 37 of their fighters were killed during the clashes on Friday at J1.

They said Machar was accompanied to the presidency meeting by only 70 soldiers of his protection unit, more than half of them were killed during the fighting at the palace.

Meanwhile, deputy chief of general staff of the SPLA-IO, General James Koang Chuol, said they were working in coordination with the SPLA general headquarters to calm down the situation in the town.