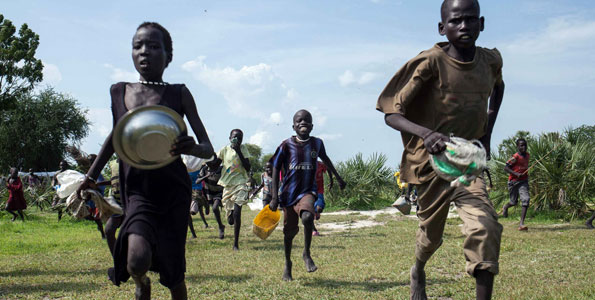 JUBA (HAN) February 8, 2016 – Public Diplomacy and Regional Stability Initiatives News. At least 40,000 people are being starved to death in South Sudan war zones on the brink of famine, the United Nations said Monday, in a plea to rival forces to let aid in.

The figures released in a UN report describe some of the worst conditions yet in more than two years of a civil war marked by atrocities and accusations of war crimes, including the blockading of food supplies.

Conditions are “escalating”, the UN said, with already over 2.8 million people needing aid, almost a quarter of the country.

“Nearly 25 per cent of the country’s population remain in urgent need of food assistance, and at least 40,000 people are on the brink of catastrophe,” the UN’s Food and Agriculture Organisation (FAO), the UN children’s agency UNICEF and the World Food Programme (WFP) said in a joint statement.

“Families have been doing everything they can to survive, but they are now running out of options,” said UNICEF country chief Jonathan Veitch.

“Many of the areas where the needs are greatest are out of reach because of the security situation. It is crucial that we are given unrestricted access now.”

That October report warned of a “concrete risk of famine” without aid, but areas remain too dangerous for experts to access, meaning it was not possible to gather the statistics needed to declare famine.

No let up in conflict

There has been no let up in the conflict and while some food has been delivered, civilians report dire conditions.

The army and rebels have repeatedly accused each other of breaking an internationally-brokered August ceasefire.

The IPC lists famine as a technical measure, which classifies hunger on a scale of one to five. Level five is classified as “catastrophe”, and when stretched to 20 per cent of the population, becomes famine.

A year ago famine was averted only after a huge intervention by aid agencies.

Those worst affected are in the northern battleground state of Unity, once the country’s key oil producing region, but now the scene of some of the heaviest fighting, including the mass abduction and rape of women and children.

The counties of Mayendit, Koch, Leer and Guit are hardest hit, with people there surviving by scavenging swamps for water lilies and fish, but those will dry up in the dry season in coming months.

With fighting making those areas too dangerous to visit, IPC experts measured malnourishment from those fleeing the hunger zone into a UN peacekeeper base in Bentiu, where some 120,000 people are sheltering.

It warned that people there were already “destitute” and “the situation is likely to deteriorate.”

Civil war erupted in December 2013 when President Salva Kiir accused his former deputy Riek Machar of planning a coup, setting off a cycle of retaliatory killings that have split the poverty-stricken, landlocked country along ethnic lines.

UN aid chief in South Sudan Eugene Owusu said he was concerned as the “wide-ranging and negative ramifications for the humanitarian operation at a time when needs are higher than ever.”

The UN said conditions are “particularly worrisome” because they show an increase in hunger during the post-harvest period, when people should have the most food, warning that the hunger season will start earlier and last longer than normal.

“Many traders are going out of business as cereal prices hit record high prices,” the IPC report read.

While South Sudan’s hunger is sparked mainly by war, drought across the Horn of Africa is also putting millions at risk, with floods and failed rains caused by the El Nino weather phenomenon.

In Somalia, the UN warned on Monday that over 58,000 children will starve to death without urgent aid, with 950,000 people struggling every day to find food.