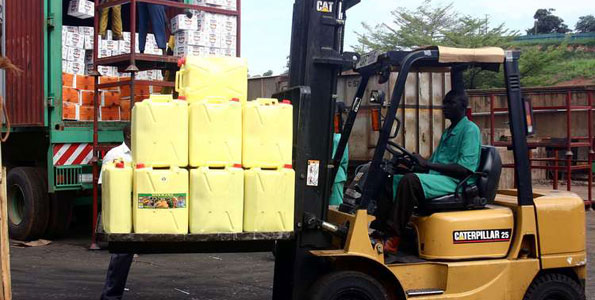 KAMPALA (HAN) November 21.2016. Public Diplomacy & Regional Security News. As East Africa was celebrating the seventh edition of the EAC Week, community members Rwanda and Uganda were working to resolve a stalemate over Kigali’s decision to impose duty on vegetable oil products by Ugandan miller AK Oils and Fats, a subsidiary of the Mukwano Group.

Rwanda imposed Customs duty on Mukwano Group refined vegetable oil after finding that the products did not conform to the revised rules of origin that require that imported inputs must not exceed 60 per cent of the value of final product.

“Mukwano is importing crude palm oil for refinement that contributes over 60 per cent of the final products, which makes them taxable under the new 2015 EAC rules of origin,” he said.

Apart from Mukwano products, RRA said that all the EAC crude palm oil importers have to be charged under the revised rules.

Although Mukwano produces sunflower oil from locally grown seed, Rwanda’s Minister for Trade, Industry and East African Community Affairs (Mineacom) Francois Kanimba said the miller had failed to make a distinction between products that had superior Ugandan value and those that did not.

“We were alerted to this irregularity after Rwandan edible oil millers accused the Mukwano Group of falsification of data about the value addition component of their products sold in Rwanda. Subsequent assessment by our teams found the complaints to be valid,” Mr Kanimba said.

“This particular case of Mukwano products will be discussed during a meeting with our counterparts from Uganda this week,” said Mr Kanimba.

Rwanda is charging 25 per cent duty on imported oil as well as the EAC refined oil, which is not bound by revised rules of origin. The EAC Secretariat set up a task force to investigate Rwanda’s move against Mukwano products but it is yet to make its findings public.

According to Mineacom statistics, Rwanda on average earns $25 million (Rwf20 billion) annually from informal exports to Uganda, while its formal imports from Uganda are worth $204 million (Rwf167 billion).