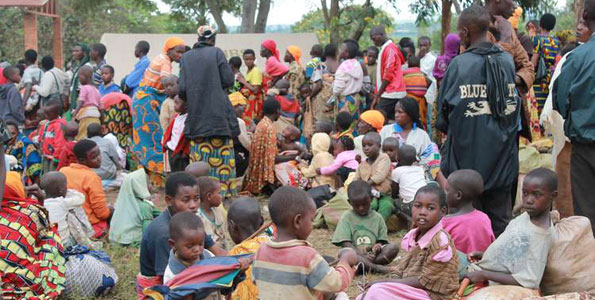 KIGALI (HAN) February 12, 2016 – Public Diplomacy and Regional Stability Initiatives News. Rwanda is to relocate refugees from Burundi to other countries, the government said Friday, amid accusations Kigali was meddling in the affairs of its troubled neighbour.

“The government of Rwanda… will immediately begin working with partners in the international community to plan the orderly and safe relocation of Burundian refugees to third countries,” the statement read.

Last week UN experts told the Security Council that Rwanda has recruited and trained refugees from Burundi, among them children, who wanted to remove Burundi’s President Pierre Nkurunziza from power.

Burundi has repeatedly accused Rwanda of backing rebels intent on overthrowing the government in Bujumbura. Kigali has fiercely denied the accusations.

“Rwanda readily shoulders its obligations to protect and care for refugees,” the government statement said.

“However, experience in the Great Lakes is that the long-term presence of refugees so close to their country of origin carries considerable risks for all involved.”

Burundi has been in turmoil since Nkurunziza announced plans in April to run for a third term, which he went on to win. Hundreds of people have been killed and at least 230,000 have fled the country.

Some 75,000 Burundian refugees are in Rwanda, according to the UN refugee agency, UNHCR.

“The callous indifference to the well known root causes of instability in Burundi, and the refugee exodus is troubling,” Rwandan Foreign Minister Louise Mushikiwabo said.

“It also exposes refugees to increased threats from forces at home and compromises lasting political solutions. For Rwanda, the growing risks to our national security from the Burundian impasse and misunderstandings in our foreign relations are unacceptable.”

Neighbouring nations already host thousands of Burundian refugees in overstretched camps, with Tanzania hosting some 130,000 and Democratic Republic of Congo has over 18,000. Uganda, which borders Rwanda to the north, has 21,000.

It was not clear where Rwanda plans to send the refugees to.

“In recent months, Rwanda has made requests to international partners and organisations to host Burundians living in camps and in towns in Rwanda,” Kigali’s statement added. “No party has come forward yet, even as the political situation in the refugees’ country of origin shows no improvement.”

Violence continues in Burundi. On Thursday, a grenade blast wounded 26 people in the capital Bujumbura, nine of them seriously, the latest in a string of attacks.
On Wednesday, the United States accused Rwanda of involvement in “destabilising activities” in Burundi.

The US concerns were raised in the Senate Foreign Relations Committee by two top diplomats, who cited reports from colleagues in the field that point to Rwandan involvement in the Burundi crisis.

“There are credible reports of recruitment of Burundian refugees out of camps in Rwanda to participate in armed attacks by Burundian armed opposition against the Burundian government,” said Thomas Perriello, US envoy for the Great Lakes region of Africa.