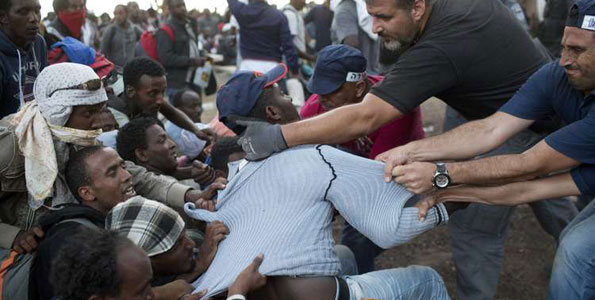 KIGALI (HAN) February 13, 2016 – Public Diplomacy and Regional Stability Initiatives News. Rwanda is in negotiations with Israel over the terms for accommodating refugees from Africa who are seeking asylum in Jerusalem.

Rwanda’s Minister of Foreign Affairs Louise Mushikiwabo said the negotiations would determine the resettlement package and the number of refugees to be flown from Israel, contrary to some reports that some refugees from Eritrea and Sudan had already been admitted to Rwanda as part of the deal.

“We were approached by Israel on the resettlement of some refugees, so were a number of other countries, not just Rwanda. This happened about two or one and a half years ago… We haven’t been able to finalise [the deal],” Ms Mushikiwabo said last Tuesday.

“Our immigration officials and their Israeli counterparts have been discussing the resettlement package in terms of where the refugees should settle in Rwanda, what kind of flexibility they would have and the medium-to-long-term status.”

A BBC report on February 3 however claimed that the Israeli government already had deals in place with Rwanda and Uganda to host its “unwanted” migrants.

Uganda confirmed it is receiving the refugees from Sudan and Eritrea, who had sought asylum in Israel but were to be deported to a third country.

The BBC also claimed to have interviewed some refugees who were flown to Rwanda under this deal.

One of these refugees is identified by BBC as Tesfay, an Eritrean who is said to have been flown to Rwanda from Tel Aviv in March 2015, on the promise of getting legal status, a home and a job.

In October last year, Israeli authorities said 3,000 asylum seekers had left Israel for a “third country,” without mentioning the country.

But only seven registered with the UN High Commissioner for Refugees in Rwanda, all of them Eritreans, and only eight, mostly from Sudan, in Uganda, according to the BBC.

These claims were repeated by the International Refugee Rights Initiative (IRRI), which alleged that some refugees have already been “forcibly” flown to Rwanda and Uganda.

“These asylum seekers are sent to Uganda and Rwanda with a promise from the Israeli authorities that they will be provided with the necessary papers to enable them to stay legally in the receiving country. However, our findings show that, in reality, they do not receive any legal status,” IRRI said.

In mid-January, Ms Mushikiwabo went on a two-day visit to Israel, where she held talks with Tzipi Hotovely, Israeli Deputy Minister of Foreign Affairs, to discuss “Israel’s continuing contribution to the development of Rwanda’s agriculture and national water system.”

When contacted, Leo Vinovezky, Israeli deputy ambassador to Rwanda, only reiterated that Israel and Rwanda maintain “excellent bilateral relations and discuss a variety of areas of mutual interest.”

In April last year, President Paul Kagame told a press conference that there is “some package” that the asylum seekers get — possibly referring to the $3,500 that the Israeli government gives refugees who are willing to leave Israel for Rwanda or Uganda.

Civil wars in Sudan and South Sudan have led to a massive exodus of asylum seekers; while the IRRI estimates that as many as 3 per cent of 6 million people have fled Eritrea in fear of a lifelong national service in the military.