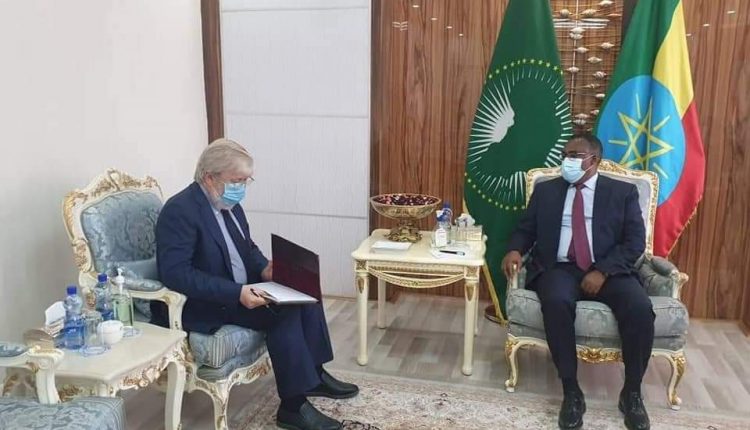 On the occasion, Demeke thanked Russia for standing by the Ethiopian side during the recent the United Nations Security Council (UNSC)  meeting.

The Deputy Prime Minister also assured the ambassador that effective humanitarian support is underway in Tigray in the Tigray regional state.

The two also underlined the need to further cement ties with cooperation in bilateral  multilateral forums.

in a related development, Ethiopian Ambassador to Djibouti, Berhanu Tsegaye received the newly appointed US counterpart, Ambassador Jonathan Pratt in his office today.

Ambassador Berhanu underscored the need to further strengthen the ties and called for mapping out new areas of cooperation.

The Ambassador further noted that Ethiopia has always attached high importance to its relations with the U.S.

Recalling the law-enforcement operation by the Ethiopian Government following the vile assault on the Ethiopian National Defense Force by the TPLF click, the Ambassador stressed that his Government has allowed unimpeded access to humanitarian assistance as well as its unrelenting commitments to thoroughly investigate alleged crimes committed in the region.

He also recalled Premier Abiy Ahmed’s call to openly engage with the African Commission on Human People’s rights in undertaking a joint investigation with the Ethiopian Human Rights Commission.

Regarding situations in Sudan, the Ambassador reiterated his government’s firm belief that only peaceful dialogues and mutual respect will bring forth a lasting solution than militarization that would subsequently worsen the ongoing situation.

The two sides held talks on other mutual affairs of socio-economic issues as well, according to Ethiopian Embassy in Djibouti.