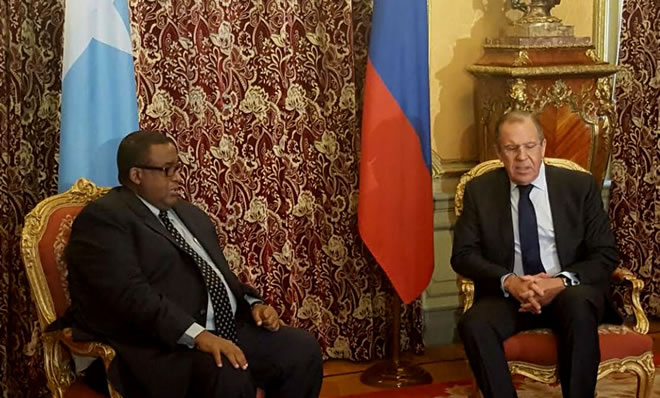 MOGADISHU (HAN) April 21, 2016. Public Diplomacy & Regional Security News.The government of Somalia has asked Russia to help equip its armed forces in its fight against terror group al-Shabaab not just in Somalia but in region

For the last few years Kenya and Somalia have suffered severe attacks from the Somalia based al-Shabaab militants, but now both countries should be optimistic in destroying the the terror group, as a new ally is about to join them.

The government of Somalia also asked for Russia’s help in strengthening of its economy which has been struggling.

“Support in peacekeeping operations is one of the possible aspects of strengthening our armed forces. It is highly important for us to strengthen our law enforcement agencies to fight terrorism. Therefore, we would like to request such support from you,” Sharmarke said at the meeting with Sergei Lavrov the Russian foreign minister.

Lavrov said Russia is ready to consider military cooperation with the government of Somalia in combating terrorism.

“I know that during your visit to Russia, you would like to talk in particular about equipping the Somali security forces with all that is necessary to fight terrorists,” Lavrov said.

Somalia has been given support in its war against the terror group by Kenya, which organised Operation Linda Nchi in October 16, 2011.

The Kenyan forces managed to remove the terror militants from their bases in southern Somalia including their key base, the port town of Kismayu on September 29 2012.

Key allies supporting Somalia against al-Shabaab are Amisom forces, the US government and Ethiopia.

Al-Shabaab emerged in 2006 from the now-defunct Islamic Courts Union, which once controled  Somalia’s capital of Mogadishu.

The militant group launched its own insurgency on major Somali cities in 2009, taking control of Mogadishu and southern Somalia.