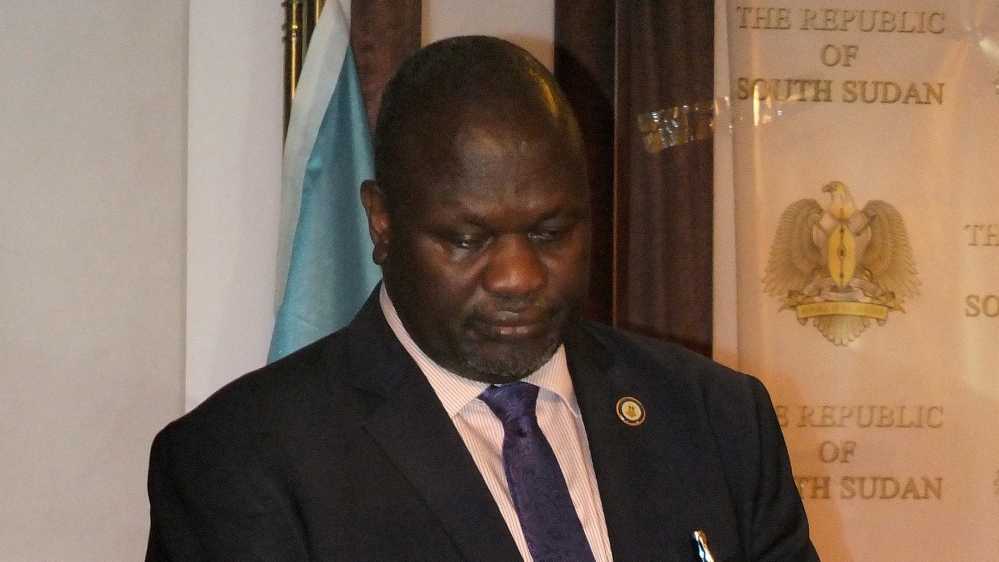 In an exclusive phone interview on Wednesday, Machar said: “I’m still the first vice president of the republic of South Sudan. The appointment made yesterday by President Salva Kiir is illegal.

“It has no basis because the peace agreement does not give him the powers to appoint a first vice president under the current circumstances.”

Kiir replaced Machar on Monday with General Taban Deng Gai, after a sharp surge in violence earlier this month between government and opposition fighters threatened to send the world’s youngest country back to all-out civil war.

Machar fled the capital, Juba, more than two weeks ago and has been in hiding ever since.

Machar told Al Jazeera that he is currently “around Juba”, adding, however, that he will only return to the capital when an outside force intervenes.

“I am waiting for the international community and regional body to say they will deploy troops to Juba and once they do that, I will return to implement the [peace] agreement.”

But, Machar said, that if the international community failed to intervene, he might order his followers to make a move to march towards Juba in the future.

“As long as the international community and the regional third party force are being waited to deploy, we will not disrupt that,” he said.

“But if they fail, this will be an indication that the whole agreement is forsaken by the international community and the regional body that brokered the peace agreement.”

‘South Sudan is better off with Taban’

On Thursday, Machar was given a Saturday afternoon deadline by Kiir to return to Juba and work together towards rebuilding peace.

But, with Machar missing, his party convened on Saturday in Juba and came up with a resolution to replace him with Taban.

On Tuesday, the UN warned Kiir that any political appointments must be consistent with last August’s peace deal that ended nearly two years of civil war – under the agreement, the vice president must be chosen by the South Sudan Armed Opposition.

Yet, speaking also to Al Jazeera, South Sudan’s presidential spokesman Ateny Wek Ateny said that Machar’s own SPLM-IO group had backed Taban’s appointment, adding that Machar should “address this issue within his party”.

“Taban became the first VP on the ticket of the SPLM-IO, then Dr Riek has to address that issue within the SPLM-IO. This is not the business of anybody in South Sudan,” Ateny said on Wednesday.

“I want to assure you that South Sudan will be more peaceful with Taban and Kiir instead of Riek Machar,” he added.

Machar, however, told Al Jazeera that “the appointment of Taban … is not acceptable because he has defected and joined the faction of President Salva Kiir.

“He cannot appoint someone who has defected to replace me.”

South Sudan was founded with optimistic celebrations in the capital on July 9, 2011, after it gained independence from Sudan in a referendum that passed with a nearly 100 percent of the vote.

The country descended into conflict in December 2013 after Kiir accused Machar of plotting a coup.

Machar and commanders loyal to him fled to the countryside, and tens of thousands of people died in the conflict that followed. Many civilians also starved.

The pair of rivals signed a peace agreement late last year, under which Machar was once again made vice president.

The latest setbacks are putting the fragile peace plan at risk.