Home frontpage S.Sudan: Return of Dr. Machar to Juba and next political move 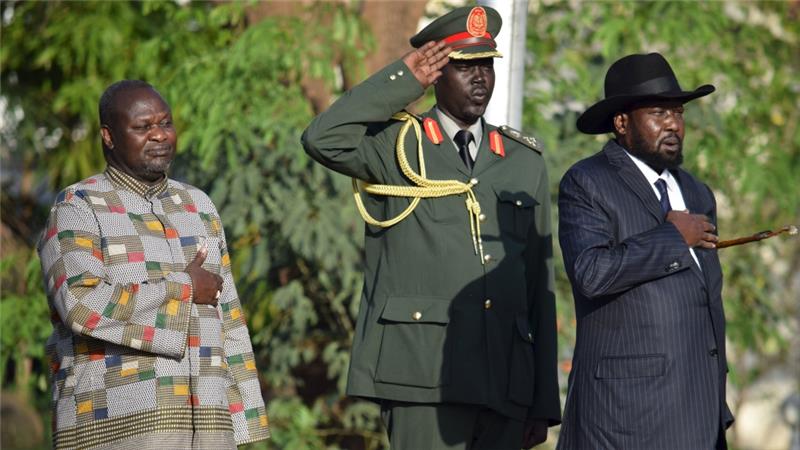 JUBA (HAN) April 26, 2016. Public Diplomacy & Regional Security NewsOPINION By James Okuk. After exhausting the immature dramatic politicking about return of Dr. Riek Machar to Juba to take up his duties as the First Vice President of the Republic of South Sudan for 30 months of the overdue transitional period, finally the most wanted militarized politician arrived in Juba and took oath of office on Tuesday, 26th April 2016. Now the politics of Pagak-to-Juba is over. What is remaining is how dirty power politics in Luri and Jebel Kujur (New Pagak) shall survive the elusive gunboat diplomacy.

The August 2015 Agreement on Resolution of Conflict in the Republic of South Sudan (ARCSS) is itself an ambitious project the D-days of its implementation modalities shall remain suspicious, if not unrealistic, in many aspects. The peace deal was designed with a purpose of silencing the guns and continuing with politics as usual in a less bloody and non-disaster in humanitarian dignity of the people.

SPLM-IG has not been sleeping on the game of entrenching its support base for the control of the next government by any means possible. This faction has continued with operationalization of 28 states despite the diplomatic advice of the region and the international community not to pursue it unilaterally without first conducting objective feasibility studies through an inclusive and impartial professional commission.

Incorporating the letter and spirit of the ARCSS into the Transitional Constitution of South Sudan (2011) so as to promulgate the Transitional Constitution (2016) has been suspended due to lack of consensus on the defunctness of 10 states, limitation of powers of the President, filling up of parliamentary vacancies and other changes required for realizing transition from war to peace. The other critical legislations for conducting government affairs during the transitional period are also still pending political quarrels.

Electing an Equatorian politician to be the Speaker of the National Legislative Assembly for the transitional period is still contentious as to who will gain the majority votes during internal elections that is supposed to be chaired by the oldest MP rather than the sitting Speaker. Equatorians MPs are found in every party to the ARCSS (GRSS, SPLM-IO, SPLM-FDs and Other Political Parties) and the winner at the end will depend on the intelligence of the alliances inside the parliament. The SPLM-IG’s Parliamentary Caucus is no longer cohesive as it used to be because many Equatorians are no longer the known loyalists to the GRSS agenda. They might join hands with others to come up with one candidate of their joint preference who might not be controlled by the GRSS. They can be dismissed from SPLM-IG party but that will not be a license of uprooting them from their parliamentary seats because the constitution and ARCSS still protects them. But after all there is not going to be opposition in the parliament during the transitional period.

More critically, the GRSS has not taken the necessary measures to cement the already-sour bilateral relations with the Sudan in the light of comprehensive implementation of all the September 2012 cooperation agreements on borders, oil, trade, freedoms, banking, post-service benefits, pension, debts, assets, Abyei and viability. Juba and Khartoum still don’t trust each other and have been suspicious of regime change with bad wishes in the back scratching. Nonetheless, politics of the International Criminal Court (ICC) for Sudan and African Union Hybrid Court for South Sudan is what shall affect both SPLM-Juba and NCP-Khartoum without exception because of the magnitude of atrocities committed against humanity in the course of their conduct of the civil wars.

The economy is in shambles due to infection by the Dutch Disease and reduction of crude oil prices in international markets. Dollars and other hard currencies are no longer flowing to Juba as they used to when the Comprehensive Peace Agreement was implemented in 2005 – 2011. Borrowing money from IMF and other international financial institutions is going to be followed by stringent conditions, especially reforms and accountable standardization of the civil and military services. Approval of government monies and distributing it like humanitarian relief items is not going to be possible as it used to be in the past when Dr. Riek was the Vice President to Salva Kiir.

The GRSS has rushed South Sudan into the East African Community (EAC)’s membership without due consideration to the current country’s weak situation in economic productivity and equitable export-import trade balance. Since the decision has not been people’ centered, the Transitional Legislative Assembly shall be faced with a dilemma of either ratifying or delaying the EAC Treaty of Establishment and other related necessary documents of the bloc.

The January 2015 Arusha Reunification Agreement is not going to materialize as Kiir has announced his elections candidacy in advance on SPLM ticket. That would mean the SPLM-IO and SPLM-FDs have to find salvation outside the disunified SPLM if they would like to vie for Presidency seat in the next nearest future. The game is very clear and the reunified SPLM field is not going to be leveled for every candidate to play freely and safely. And as long as the SPLM-Kiir and SPLM-Riek continue to command armed forces, violent and deadly clashed during elections campaign shall not be ruled out totally unless some unusual rectifying situation emerged by then to neutralize the danger.

Notwithstanding, the return of Dr. Riek to Juba is not going to be business as usual because he is going to be a powerful First Vice President as stipulated in the ARCSS. He is going to have an independent office which is not directly subservient to the President’s Office, unlike the case of Vice President James Wani Igga whose powers shall depend on what President Kiir assigns to him. He is even not supposed to be consulted on anything unless Kiir and Riek agree voluntary in advance to do so.

But again the ARCSS has not left Kiir and Riek to act alone as they wish because the transitional Council of Ministers has been given powers to control and direct their moves and decisions. The Joint Monitoring and Evaluation Commission (JMEC) under leadership of President Festus G. Mogae shall also have its final say on any decision of the Presidency, the Council of Ministers and even the Parliament if they overstep the limits of the ARCSS’s letter and spirit.

No unilateral decisions shall be tolerated and no opposition shall prevail except for the Civil Society and those who are not part of the transitional government partners. No South Sudanese politician is going to be allowed to misbehave by conducting himself unilaterally like a king or an emperor. All South Sudanese are supposed to be partners and watchdogs in implementing the ARCSS.

Running away from Juba to the rebellious bush is not going to be tolerated any more if a politician found himself defeated by transitional politics. The rebels who have remained in the bush shall be persuaded to respond to the call of peace and pursuit of resolution of their grievances through dialogue. Transitional Justice, reparation, reconciliation, mending of broken social fabrics and healing is supposed to kick off in earnest. Thanks to peace-lovers and farewell to war-mongers. The next move should be the inculcation of serious planning, research, development and prosperity for all South Sudanese. Dr. James Okuk is a lecturer of politics reachable at okukjimy@hotmail.com The views expressed in the section are solely the opinions of the writers.