Home Ethiopia Rep. Smith on Ethiopia Rights Abuses: ‘Abomination When You Torture Your Own... 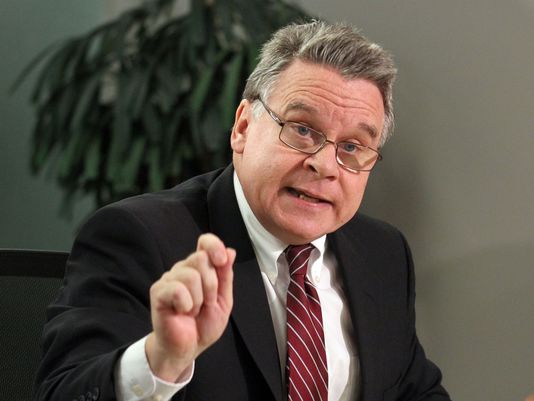 “It is an abomination when any country tortures its own citizens,” Smith told

a press conference on Capitol Hill. “The post-traumatic stress disorder that is suffered by those, not to mention the physical injuries that they endure, but the psychological consequences usually go on for a lifetime.”

Smith, who is chairman of the House Foreign Affairs’ subcommittee on Africa, Global Health, Global Human Rights and International Organizations, was joined by Reps. Al Green (D-Texas) and Mike Coffman (R-Colo.) to announce the introduction of a bipartisan resolution “supporting respect for human rights and encouraging inclusive government in Ethiopia.”

“This legislation calls for credible investigations into the government in the Oromia and Amhara regions, as well as the recent fire and shootings at Qilinto Prison,” Smith said in his opening remarks. “House Resolution 861 also urges the government of Ethiopia to allow a United Nations human rights rapporteur to conduct an independent examination of the state of human rights in Ethiopia.”

Smith said the U.S. should consider all aspects of its relationship with its traditional Ethiopian ally, including foreign aid and the issuance of visas, when addressing rights abuses in that country.

Also attending the press conference was Feyisa Lilesa, who won the silver medal for the marathon at the 2016 Olympics. Following his victory, Lilesa displayed solidarity with the people protesting President Mulatu Teshome’s mistreatment of people of different ethnic groups. Lilesa is now seeking asylum in the United States.

“The situation in Ethiopia is getting worse and it is very concerning,” Lilesa said. “The Ethiopian government is imprisoning its people, it is killing its people. It is forcing its people into exile.”

(Amy Furr contributed to this report.)